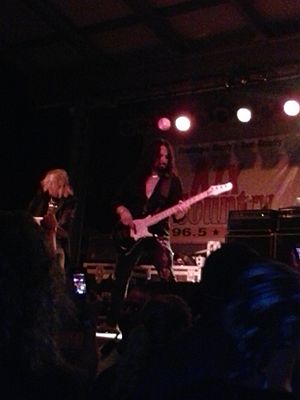 Bjorn Englen started his musical career in Sweden in 1984 as a drummer, however switched to bass within a couple of months. He performed with several local acts before relocating to Los Angeles, CA in 1993.

In 1994 Englen was hired to play bass for heavy metal group Quiet Riot. He did pre-production work and promotion for the album Down to the Bone as well as 22 shows in a 1995 tour supporting the album.

Shortly thereafter Englen formed his own group Soul Sign. Soul Sign did special promotional tours and shows of Europe and the US in 2010 and 2011 for the forthcoming album "Life In The Dark", which was released worldwide in the fall of 2011. The band's current line-up also features Malmsteen/Roth vocalist Mark Boals. The band also toured in Scandinavia in May 2013 and in California 2012-2014.

In 2004 to 2006, he performed throughout the US with MSG/Survivor vocalist Robin McAuley.

From 2007 to 2012, Englen played bass for Yngwie Malmsteen's Rising Force. They toured and performed in Europe and the U.S. in 2007 & 2008. A sold out tour of Japan was completed in April 2009., and a tour of Russia and Israel in April 2010. Another US Tour supporting the album "Relentless" was done in October and November 2011. Bjorn decided to leave Yngwie's band in 2012 due to unforeseen scheduling conflicts.

Former Scorpions guitarist Uli Jon Roth watched Bjorn perform his first show with Malmsteen and ended up hiring Bjorn for numerous tours and shows 2010-2013. In 2011 Englen was concurrently the bassist for three of the biggest guitar heroes of all time; Malmsteen, Roth and Tony MacAlpine.

Since October 2012, Bjorn has been a member of the Official DIO band Dio Disciples featuring long-time and most recent Dio members Craig Goldy (Dio, Guiffria) - guitar, Simon Wright (Dio, AC/DC, UFO) - drums and Scott Warren (Dio, Heaven & Hell) - keyboards with Tim "Ripper" Owens (Judas Priest) and Oni Logan (Lynch Mob) on vocals. In Oct/Nov 2012 the band did a 24 date US Tour in support of Dio's latest release "The Beast of Dio Vol. 2". In March 2013 DIO Disciples headlined at the Monsters of Rock cruise in the Caribbean Sea as well as finished a Brazil/Mexico/Texas Tour in June 2013 partially together with Nazareth. The band performed in the US & Canada in July, September and October 2013, USA 2014, Mexico 2014, Monsters of Rock Cruise 2014 & 2016, Fezen Festival in Hungary 2016 and Wacken Festival in Germany 2016 featuring a hologram performance with Ronnie James Dio as an encore. In December 2017 the band toured Europe as Dio Returns where a portion of the set featured a Ronnie James Dio hologram. The band continued to tour all over the US in 2018, and a Dio Returns US Tour was set for May/June of 2019.

Bjorn has in the last few years also worked with successful acts such as Hellion, Blackwelder, Of Gods & Monsters, Takara and more.

All content from Kiddle encyclopedia articles (including the article images and facts) can be freely used under Attribution-ShareAlike license, unless stated otherwise. Cite this article:
Bjorn Englen Facts for Kids. Kiddle Encyclopedia.