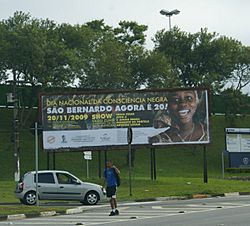 An advertisement about Black Awareness Day in São Bernardo do Campo, Brazil. 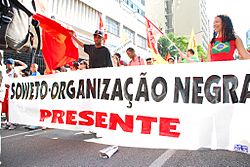 In Brazil, Black Awareness Day or Black Consciousness Day (Portuguese: Dia da Consciência Negra) is held every year on November 20. It is a day "to celebrate a regained awareness by the black community about their great worth and things they have done for the country". The date is an official public holiday in five Brazilian states.

Black Awareness Day has been celebrated since the 1960s. It has become bigger in the last few years. First, it was celebrated on May 13 (the date of abolition of slavery in Brazil). It was later moved to November 20 to honour Zumbi's death, and is sometimes called Zumbi Day.

Members of the organization "Black Movement" (the largest of its kind in Brazil) organize educational and fun events involving mainly children of African parents. These events wants to get rid of the fact that many people see Afro-Americans as less important. Other "hot topics" in the Black community during the Day of Black Awareness are the working together of African-Brazilian workers with Caucasian-Brazilian and other workers, ethnic identity, and black pride.

The "Day of the Caboclo" (Dia do Caboclo) is held on June 24. It celebrates the contributions and identity of the original caboclos and their children. This date is an official public holiday in the State of Amazonas.

"Mixed Race Day" (Dia do Mestiço) is held on June 27, three days after the Day of the Caboclo. It celebrates all mixed-race Brazilians, including the caboclos. The date is an official public holiday in three Brazilian states.

"Indian Day" (Dia do Índio) is held on April 19. It recognizes and honours the indigenous peoples of Brazil.

All content from Kiddle encyclopedia articles (including the article images and facts) can be freely used under Attribution-ShareAlike license, unless stated otherwise. Cite this article:
Black Awareness Day Facts for Kids. Kiddle Encyclopedia.