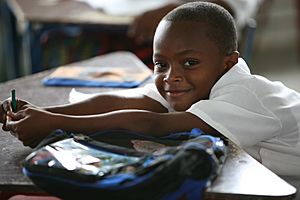 Afro-Colombians are people who are from the country of Colombia and who have ancestors who are African. There is a large population of Colombians of African descent.

Spanish colonists brought African slaves to Cartagena in the sixteenth century. They were purchased to replace the indigenous peoples who died under the harsh working conditions in the mines and on the plantations. By 1600 about 100,000 slaves had been brought to the colony. The rate increased after 1650 because of labor needed for the gold mines. Conditions were harsher for some slaves than others. Most were allowed to mine, farm and sell their goods for one day a week. The money they made could buy their freedom. Slave rebellions in the sixteenth and eighteenth centuries had slaves forming their own villages in uncontrolled areas. Slavery was abolished in 1851.

All content from Kiddle encyclopedia articles (including the article images and facts) can be freely used under Attribution-ShareAlike license, unless stated otherwise. Cite this article:
Afro-Colombian Facts for Kids. Kiddle Encyclopedia.