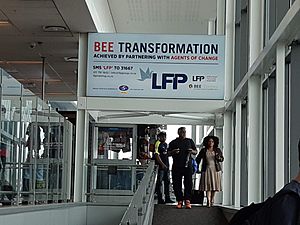 Black Economic Empowerment (BEE) is a racially selective programme launched by the South African government to redress the inequalities of Apartheid by giving black (African, Coloureds, Indians and Chinese) South African citizens economic privileges that are not available to White South Africans, in essence wealth redistribution. It is a form of Affirmative action. Although race is the overriding factor, it includes measures such as Employment Preference, skills development, ownership, management, socioeconomic development, and preferential procurement. By 2015 around R350 billion (equivalent to US$24 billion) worth BEE deals had been done by the top 100 companies on the JSE with an additional R50 billion by private South African companies indicating that 10 percent of South Africa's GDP had been transferred to 20 percent of the population in the 15 years since 2000.

All content from Kiddle encyclopedia articles (including the article images and facts) can be freely used under Attribution-ShareAlike license, unless stated otherwise. Cite this article:
Black Economic Empowerment Facts for Kids. Kiddle Encyclopedia.