The Black Madonna or Virgin Mary Shrine and Grotto is a shrine located in the unincorporated area south of Pacific and Southwest of Eureka in the state of Missouri, United States. It was constructed in 1938 by Brother Bronislaus, a Polish native, of the Franciscan order. 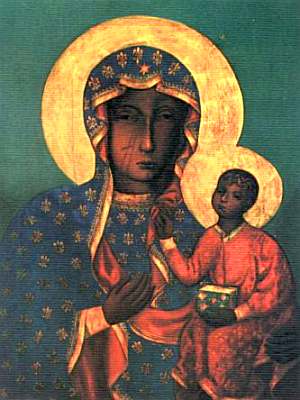 The Black Madonna of Czestochowa

The shrine has been subjected to arson and vandalism many times in its history, such as in 1958 when an arsonist set fire to the altar which burned the chapel.

All content from Kiddle encyclopedia articles (including the article images and facts) can be freely used under Attribution-ShareAlike license, unless stated otherwise. Cite this article:
Black Madonna Shrine, Missouri Facts for Kids. Kiddle Encyclopedia.