The Black Mouth Cur is a hunting and cattle dog that has its origins in Southern United States.

The Black Mouth Cur is a well-muscled rugged herding, hunting, and all around utility (or work) dog whose coat comes in a number of colors and shades, generally all shades of fawn from nearly white to mahogany. Solid white and piebald colors are not allowed in Black Mouth Curs, which in rare occasions may appear in a litter due to recessive genes. According to the breed standard of the United Kennel Club, up to ten percent of the coat may be white on the toes, tail, nose and chest; white is acceptable but not desired. As of this date the Louisiana Catahoula Leopard Cur is recognized by UKC as the Louisiana Catahoula Leopard Dog and the Plott Cur has been renamed the Plott Hound.

The name "cur" is a descriptive term for a general, short-coated, drop-eared, farm and ranch working dog. Black Mouth Curs are primarily herding dogs able to hunt big or small game, but they are also suitable as family dogs. The breed has an average litter size of 3–12, and a lifespan of 12–18 years. 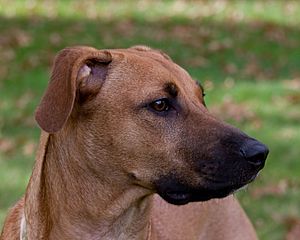 Portrait of a Black Mouth Cur, named Diesel, showing the typical melanistic mask around the muzzle.

Black Mouth Curs have short coats, either coarse or fine, and a combination of the two types may appear in the same litter. Black Mouth Curs come in many colors. All shades of red, yellow and fawn; black; brown; buckskin; or brindle; with or without black muzzle or mask. Very small amounts of white are allowed under the chin, around the nose, on the neck, chest, legs, and tip of tail, provided that no more than ten percent total of the dog's body may be white. Dilute coat colors are acceptable and may be identified by the following traits: green, yellow, or light brown eyes; white toenails; red or yellow coat without any trace of black hair. Never spotted, mottled, merle, or with white collar. A disqualification is albinism.

The muzzle is square-shaped. It may have a melanistic mask, which is most often black. Maskless dogs are allowed but not preferred. The name 'Black Mouth' refers to the dark pigmentation around the lips that also extends into the interior of the mouth including the roof of the mouth, gums, and cheeks, excluding the tongue. The ears are medium-sized and hanging and may either be melanistic like the muzzle or the same color as the coat.

The tail of a Black Mouth Cur can be of any length; long, medium, bob tailed, or none at all. Some owners of curs that are born with a tail will dock their dog's tail, and some cur dogs are born with little or no tail at all. The feet are of moderate size, compact and well arched. Pads are large, tough, and well cushioned. Toes may be webbed. Single or double dewclaws may be present.

The adult weight ranges depending on the line, from 25 pounds minimum for tree dogs (i.e. Ladner BMCs) to over 100 pounds for herding or hog dogs (i.e. the Weatherford Ben line). Their height can also vary with a minimum height of 16 inches tall. Males in the same lines are normally larger than females.

Black Mouth Curs are great family dogs. They are very social dogs if trained properly. The BMC is an "extremely smart" breed who "by nature need to bond a few weeks" with their owner/trainer before training can begin. They are sensitive dogs that are attuned to their master's voice and should never be yelled at in anger or spanked. BMCs make good family dogs as long as they have at least an acre of yard which they can access throughout the day. This dog will not be happy spending the day on the couch alone. They are very social dogs and need a human companion. They must have access to several hours of exercise daily to avoid anxiety and depression. "The BMC was bred as a homestead dog that would protect its family and home against intruders. This means that a well-bred BMC is territorial. Most BMCs, off their 'turf', work well with other dogs, hunting or herding stock, but on their family property will chase the same dog away. Their turf can be viewed by the dog as the family’s home, land, truck, or sometimes proximity to 'their person'."

"The BMC is genetically very athletic and eager to please. Given proper guidance and training, a BMC can excel in just about any activity you could imagine. They can herd animals, track or trail game, pull weights, run in a coursing event, work as a Search and Rescue dog, or anything else a smart, athletic dog that wants to please its owner can do." 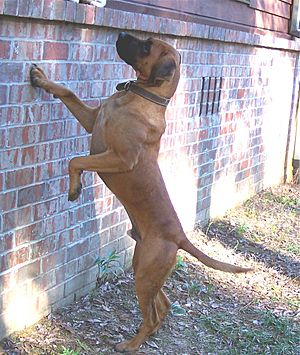 The first Black Mouth Curs registered with a national kennel registry, were Ladner Black Mouth Curs through the National Kennel Club in April 1964. Mr L.H. Ladner had such extensive written documentation of his family's breeding that the NKC recognized their dogs as a breed. (www.blackmouthcurs.com/history)

All content from Kiddle encyclopedia articles (including the article images and facts) can be freely used under Attribution-ShareAlike license, unless stated otherwise. Cite this article:
Black Mouth Cur Facts for Kids. Kiddle Encyclopedia.