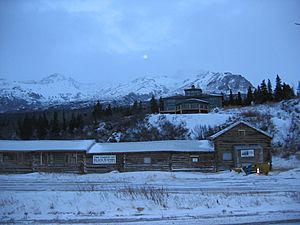 An east facing photo of the roadhouse with the new lodge visible in the background.

The Black Rapids Roadhouse, also known as the Rapids Roadhouse and the Rapids Hunting Lodge, is a historic Alaskan structure along the Richardson Highway in east-central Alaska. It was built in 1902. Construction of the Alaska Railroad led to a decline in the 1920s, but the original roadhouse continued to operate until 1993. A new, modern lodge was built near the roadhouse in 2001 and the original building is preserved as a historical curiosity and tourist attraction.

The original roadhouse was listed on the National Register of Historical Places in 2001.

The Rapids Roadhouse, variously known as Black Rapids Roadhouse or Rapids Hunting Lodge, opened at least by 1904 to serve travelers on the new Valdez-Fairbanks Trail. Of more than thirty roadhouses that operated along the route between 1902 and 1923, Rapids Roadhouse is one of the few that survive. Rapids Roadhouse continued to operate until 1993, although its peak years had been during the first decades of the 20th century. Because of this, period of significance ended in 1923.

All content from Kiddle encyclopedia articles (including the article images and facts) can be freely used under Attribution-ShareAlike license, unless stated otherwise. Cite this article:
Black Rapids Roadhouse Facts for Kids. Kiddle Encyclopedia.