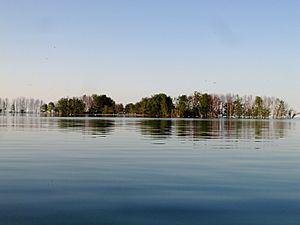 Island as viewed from SW

Black River Island is an island in Lake Huron. It is part of a series of shoals around the mouth of Black River and is 3⁄4 mile (1.21 km) NE of it. The island is included within the unincorporated community of Black River in Alcona Township.

The uninhabited rocky island is about 1,000 feet (305 m) long. Its area is less than one acre and varies with lake levels.

In the past, owners of the island have shown interest in selling it to wildlife organizations. The island is approximately 7 miles south of Scarecrow Island which is part of the Michigan Islands National Wildlife Refuge.

All content from Kiddle encyclopedia articles (including the article images and facts) can be freely used under Attribution-ShareAlike license, unless stated otherwise. Cite this article:
Black River Island Facts for Kids. Kiddle Encyclopedia.