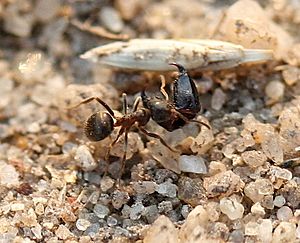 The Black garden ant (Lasius niger), also known as the Common black ant, Common house ant or Tramp ant, is a formicine ant. It is a species of the subgenus Lasius, which is found across Eurasia and in some parts of South America, Southeast Asia and Australasia. The European species is now split into two species; L. niger, which are found in open areas; and L. platythorax, which is found in forests .

The ants build nests underground, commonly under stones, but also in rotten wood, or under roots. The nests can have up to 40,000 workers, but the average size is 4,000–7,000 ants. The colony has a single queen which can live up to 15 years, and it has been claimed that some have lived for 30 years. In the early stages of a colony there can two or three queens in the nest. They will tolerate each other until the first workers come, then it is most likely they will fight until one queen remains. In tests in laboratories, worker ants have lived at least four years.

The worker ants are dark glossy black, and 3–5 mm long. The queens are 9 mm long, glossy black color, and with slight brown stripes on her abdomen. After a queen mates, she removes her wings and eats her wing muscles as food over the winter. The male ants are 3.5–4.5 mm long and are only produced by queens for mating. They have a dark glossy body, which is a different shape from the workers, and look like a wasp. They have delicate wings which stand out from the rest of the body. 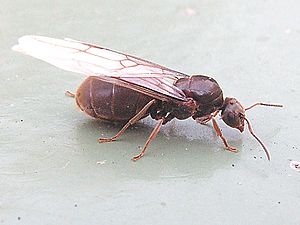 Ants mate while flying. The mating (or nuptial) flights of Lasius niger usually take place from June to September. In North America flights happen during the autumn, but in Europe they take place during the hot summer months of July and August. Flights can contain thousands of winged males and females. When the queen has mated, she will land and look for a suitable place to dig a tunnel. The males generally only live for a day or two after the mating flights.

The queen ant removes her wings to dig. When she has dug a tunnel, she blocks the entrance and then digs a small chamber to lay her eggs. The eggs hatch after 8–10 weeks. The queen does not leave the nest to look for food until eggs have hatched, and the larvae have grown into ants. She survives on the protein from eating her own wings. 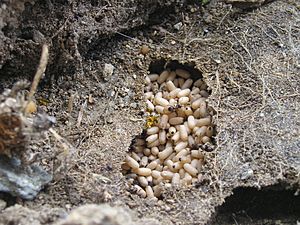 The black garden ant, like other ants, has four stages of development: egg, larva, pupa, and adult. The eggs are tiny, white, kidney-shaped, with a smooth sticky surface. This helps them to be carried in a group instead of one by one. After hatching the larvae look like tiny maggots. They need to be fed by the queen (or workers in the case of an established colony) if they are to mature. As they grow, they shed their skin, doing so usually three times in total. With each molt, the larvae grow hooked hairs which allow them to be carried in groups. At the last molt they are too big to be carried as part of a group and so are carried individually. When it is big enough, it spins a cocoon around itself. To help, the queen (or workers) may bury the larva so that it can spin its cocoon undisturbed. When the process of metamorphosis is complete the worker ant comes out of the cocoon. It is completely white but it only takes one hour to turn black.

The first worker ants are very small. Later generations of ants grow much bigger. The new worker ants begin make the nest bigger. They take care of the queen and her eggs. They open the entrance to the nest and begin to look for food above ground. They need to gather food quickly to support future growth and to feed the starved queen. The queen will have lost around 50% of her body weight. The queen will lay more eggs, which is her only task in the colony. The later generations of worker ants will be bigger, stronger and more aggressive because there is more food for them while they are growing. Instead of only having the queens to look after them, they have a team of foraging and nursing workers. Provided workers are able to find food, the colony will see an exponential rise in population. After several years, when colony is well established, the queen will lay eggs that will become new queens and males. Black ants often make large nests with with tunnels connecting the different sections.

The black garden ants eat nectar, small insects such as codling moth larvae, and fruit. The ants can 'milk' aphids, cockroaches and beetles.

All content from Kiddle encyclopedia articles (including the article images and facts) can be freely used under Attribution-ShareAlike license, unless stated otherwise. Cite this article:
Black garden ant Facts for Kids. Kiddle Encyclopedia.