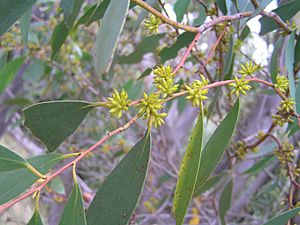 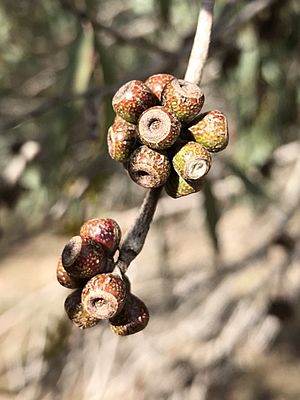 Eucalyptus stellulata, commonly known as black sallee or black sally, is a species of small tree or a mallee that is endemic to higher altitude regions of south-eastern Australia. it has rough bark on the lower part of the trunk smooth greenish bark above, lance-shaped to elliptical leaves, flower buds in group of between nine and fifteen, white flowers and cup-shaped or shortened spherical fruit.

Eucalyptus stellulata was first formally described in 1828 by the Swiss botanist Augustin Pyramus de Candolle in his book Prodromus Systematis Naturalis Regni Vegetabilis. The specific epithet (stellulata) is derived from a Latin word meaning "little star" and refers to the appearance of the clustered flower buds.

The Australian Oxford Dictionary gives the origin of "sally" and "sallee" as British dialect variants of "sallow", meaning "a willow tree, especially one of a low-growing or shrubby kind".

Black sallee occurs from near Tenterfield in New South Wales and southwards along the Great Dividing Range to the eastern highlands of Victoria. It is a common plant in grassy eucalyptus woodland, often near swamps and by streams. The soils are usually of a relatively good fertility.

All content from Kiddle encyclopedia articles (including the article images and facts) can be freely used under Attribution-ShareAlike license, unless stated otherwise. Cite this article:
Black sallee Facts for Kids. Kiddle Encyclopedia.