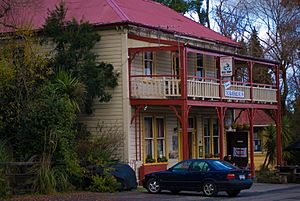 The hotel known as "Formerly the Blackball Hilton"

Blackball is a small town on the West Coast of the South Island of New Zealand, approximately 29 km from Greymouth. Elevation is approximately 100 metres. The town was named after the Black Ball Shipping Line, which leased land in the area to mine for coal.

Blackball was a centre of New Zealand radicalism and workers' militancy. It is credited as the birthplace of the New Zealand Labour Party, which followed the 1908 miners 'cribtime' strike, at ten weeks the longest in New Zealand history. In the 1913 Great Strike, Blackball miners were the last to return to work, in 1914. During the strike they had picketed miners in nearby Brunner and had burnt down the secretary of the 'arbitration' (scab) union's home. In 1925 the headquarters of the Communist Party of New Zealand moved to Blackball from Wellington. The pit closed in 1964.

The Blackball lodge of the United Ancient Order of Druids was formed originally in 1906 and like most other organisations of its day have ceased to exist in Blackball. While most businesses and organisations have shut down in the town of Blackball, the hotel once named "The Blackball Hilton" still lives on. Though now known as "Formerly the Blackball Hilton" due to a lawsuit by the Hilton hotel chain, the historic hotel remains in business as a place to sleep and symbol of the towns historic background.

Blackball has a unique literary inheritance: for a small town, it has managed to attract more than its share of literary representations. Bill Pearson's "Coal Flat" (1963) is a major New Zealand novel in the dated social realist tradition. Pearson had taught in the town as a probationary teacher in 1942, and had formed a friendship with the publican's family. His book caused a bit of a storm amongst the locals, as they tried to "spot the character" - who had Pearson based these people on? He died in 2002. 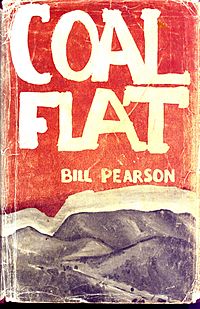 Jeffrey Paparoa Holman's "The Late Great Blackball Bridge Sonnets" published in 2004 contains poems based around the railway bridge that linked the community with the outside world. The poems also mention people and features of the town, which Holman recalls from his childhood in Blackball during the 1950s and 1960s.

Paul Maunder, who lives in the town, is a playwright who has written and staged a number of plays about the town and working-class history.

All content from Kiddle encyclopedia articles (including the article images and facts) can be freely used under Attribution-ShareAlike license, unless stated otherwise. Cite this article:
Blackball, New Zealand Facts for Kids. Kiddle Encyclopedia.