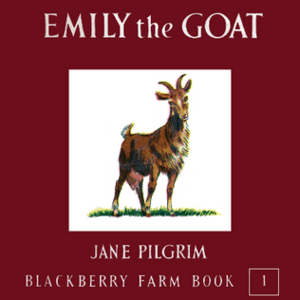 Cover of Emily the Goat, the first book in the Blackberry Farm series.

Blackberry Farm is a series of children's literature stories. They were written by Jane Pilgrim, and first published around 1950. The original books were illustrated in colour by F. Stocks May. Published by the Brockhampton Press of Leicester, they originally retailed at One Shilling and Sixpence.

The series described events on a fictional farm, Blackberry Farm, situated on the outskirts of an unnamed English village. The farm, seemingly a sheep and dairy property, is owned by Mr and Mrs Smiles, who have two children, Joy and Bob, but the central characters of the stories are various animals. Most of the animals, although depicted at their normal size, appear to speak English and interact with the human characters.

The series of stories include:

All content from Kiddle encyclopedia articles (including the article images and facts) can be freely used under Attribution-ShareAlike license, unless stated otherwise. Cite this article:
Blackberry Farm (books) Facts for Kids. Kiddle Encyclopedia.