Blackburn B-103 facts for kids

Blackburn B-103 Buccaneer was made for the Royal Navy, the naval part of the United Kingdom´s armed forces. It was also by the Royal Air Force starting in 1968. That was the first airplane with some technical innovations like a system for increased buoyancy, a split rudder (which widens to be an air brake), and rotating magazine for nuclear or conventional weapons. After tests, this plane was selected and put in use by Royal Navy in 1962. This aircraft was retired in 1994. It was used in the 1991 Gulf War. 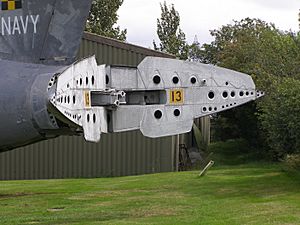 All content from Kiddle encyclopedia articles (including the article images and facts) can be freely used under Attribution-ShareAlike license, unless stated otherwise. Cite this article:
Blackburn B-103 Facts for Kids. Kiddle Encyclopedia.