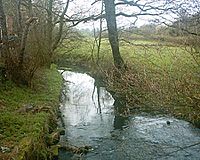 The Blackburn Brook flowing under Grange Lane in Ecclesfield.

The Blackburn Brook is a stream in Sheffield, South Yorkshire, England which flows through the Blackburn Valley along the M1 and Ecclesfield Road and joins the River Don near the Meadowhall shopping centre. Downstream from the A61 road at Chapeltown the Blackburn Brook is defined as a main river by the Environment Agency, which requires new building development to be at least 8m from the bank side as a flood defence measure and to allow access to the watercourse for maintenance.

Between Blackburn village and Grange Lane the brook originally formed the boundary between Sheffield and Rotherham. It is joined by Hartley Brook Dike (known as Sheffield Lane Dike and Tongue Gutter along part of its course), near the junction of Ecclesfield Road and Sicey Avenue. With the coming of the South Yorkshire Railway in the 1850s the course of the brook was straightened to run parallel with the trackbed through the valley, however the boundary continued to follow the original course. It runs in a culvert along part of the course by the railway line, which is now closed and forms part of the route of the north–south section of the Trans Pennine Trail alongside the brook.

The brook provided power for a number of mills along its course, including the New Mill and the Old Mill at Ecclesfield. To the East of the confluence of the Hartley Brook Dike the Blackburn Brook was dammed to provide power for the Gibraltar Steel Works and further downstream, to the East of Grange Lane a mill race fed a dam (the local term for a body of water behind a dam wall) at Grange Mill. At Blackburn village the brook powered the Blackburn Wheel (charcoal works), close to the present day Royal Oak public house.

There was a power station that once stood near the confluence of the Blackburn and the Don called Blackburn Meadows Power Station. The power station is no longer in use but both cooling towers could be seen next to the Tinsley Viaduct until 24 August 2008, when they were demolished, scuppering alternative plans to use them as a public art installation.

Water levels are monitored by the Blackburn Brook at Sheffield Wincobank gauging station. The normal range for this location is between -0.02 metres and 0.42 metres. During the 2007 United Kingdom floods the level recorded by this station was 2.41 m. The brook to burst its banks at the entrance to Chapeltown Park, and where the stream flows under the A629 Cowley Lane. Many properties on Cowley Lane and Falding Street were flooded and a local schoolboy had to be rescued from fast flowing waters after falling into the stream.

All content from Kiddle encyclopedia articles (including the article images and facts) can be freely used under Attribution-ShareAlike license, unless stated otherwise. Cite this article:
Blackburn Brook Facts for Kids. Kiddle Encyclopedia.