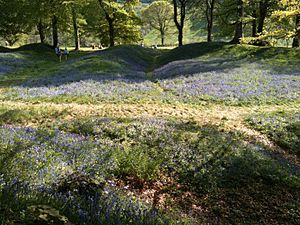 The south view of the barbican at Blackbury Camp 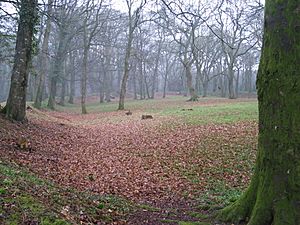 View of the ramparts from inside the site in winter. 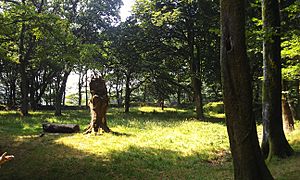 View of the Camp interior in summer. 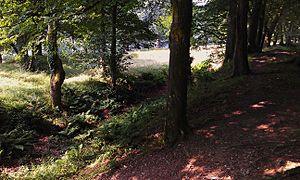 Ramparts at the Camp

Blackbury Camp is an Iron Age hill fort situated in Southleigh, Devon, England. The ramparts are still relatively high, showing an unusual entrance feature. The fort occupies the end of a large ridge at some 185 metres (607 ft) above sea level. It was defended by a single bank and ditch, forming a roughly D-shaped enclosure approximately 200 metres (660 ft) long and 100 metres (330 ft) wide. A triangular barbican was added to the south but was never completed. The fort was probably occupied in the 2nd and 1st centuries BC by a cattle-farming community.

All content from Kiddle encyclopedia articles (including the article images and facts) can be freely used under Attribution-ShareAlike license, unless stated otherwise. Cite this article:
Blackbury Camp Facts for Kids. Kiddle Encyclopedia.