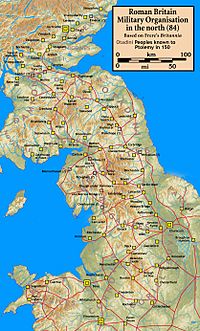 A map of Roman sites in northern Britain c. 84, including Blatobulgium (marked as 'Birrens').

Blatobulgium was a Roman fort, located at the modern-day site known as Birrens, in Dumfriesshire, Scotland.

Blatobulgium is recorded in the Antonine Itinerary. The name derives from the Brittonic roots *blāto- 'bloom, blossom' or *blāto- (from earlier *mlāto-), 'flour' and *bolgo-, 'bag, bulge'. The name may mean 'flowery hillock' or 'flowery hollow'. However, as there are granaries at the fort, Blatobulgium may be a nickname meaning 'Flour Sacks'.

Western edge of the fort

The fort formed the northern terminus of the Roman-era Watling Street (using an extended definition of this road), or more simply Route 2 of the Antonine Itinerary. It was located in the territory of the Selgovae.

Birrens was first occupied in the Flavian period from AD 79 onwards, when its internal buildings were presumably of timber. Under Hadrian, soon after AD 122, a new fort was constructed whose central buildings were probably of stone. However the visible fort and its internal buildings date from the Antonine period around AD 142. They were destroyed perhaps by enemy action around AD 155, but the replacement stone buildings in the second Antonine period dating to AD 159 onwards were of much poorer quality. Occupation lasted until about AD 180-84. There appear to be no finds later than the Antonine period.

All content from Kiddle encyclopedia articles (including the article images and facts) can be freely used under Attribution-ShareAlike license, unless stated otherwise. Cite this article:
Blatobulgium Facts for Kids. Kiddle Encyclopedia.