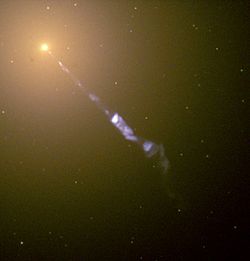 This Hubble Space Telescope photograph shows the jet of matter ejected from M87 at nearly light speed, as it stretches 1.5 kpc (5 kly) from the galactic core

A blazar is a very compact quasar (quasi-stellar radio source). They have a presumed supermassive black hole at the center of an active, giant elliptical galaxy. Blazars are among the most energetic phenomena in the universe and are an important topic in astronomy.

Blazars are one of a group of active galaxies that host active galactic nuclei (AGN). An AGN is a region at the centre of a galaxy which has a much higher than normal luminosity over some or all of the electromagnetic spectrum.

The name "blazar" was originally coined in 1978 by astronomer Edward Spiegel. Blazars are AGN with a relativistic jet which is pointing in the general direction of the Earth. We observe "down" the jet, or nearly so. Many blazars have apparent superluminal features within the first few parsecs of their jets, probably due to relativistic shock fronts.

The blazar at the centre of galaxy M87 is fuelled by a black hole with a mass of about three billion solar masses within ten light years of the galaxy centre.

All content from Kiddle encyclopedia articles (including the article images and facts) can be freely used under Attribution-ShareAlike license, unless stated otherwise. Cite this article:
Blazar Facts for Kids. Kiddle Encyclopedia.