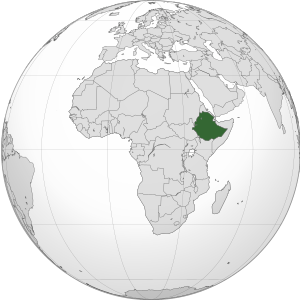 Blen Mesfin (Amharic: ብሌን መስፍን) is an official in Ethiopia’s opposition Semayawi (Blue) Party. In 2016 she was named one of twenty women political prisoners in the FreeThe20 campaign by Samantha Power, the U.S. Ambassador to the United Nations.

Mesfin was arrested at a protest in Addis Ababa in April 2015. The protest was for 26 Ethiopians killed by the a group called Islamic State in Libya. More than 30 members of the Semayawi Party were arrested before an April 27 political rally.

Mesfin was released in December 2016, along with a mass release of 9,800 people detained under the state of emergency. According to Ethiopian journalist Tesfalem Waldyes‏ she was re-arrested during a wave of arrests in October 2016.‏

All content from Kiddle encyclopedia articles (including the article images and facts) can be freely used under Attribution-ShareAlike license, unless stated otherwise. Cite this article:
Blen Mesfin Facts for Kids. Kiddle Encyclopedia.