Samantha Jane Power (born September 21, 1970) is an American academic, diplomat and government official who is currently serving as the Administrator of the United States Agency for International Development. She previously served as the 28th United States Ambassador to the United Nations from 2013 to 2017. Power is a member of the Democratic Party.

Power began her career as a war correspondent covering the Yugoslav Wars before embarking on an academic career. In 1998, she became the Founding Executive Director of the Carr Center for Human Rights Policy at the Harvard Kennedy School, where she later served first Anna Lindh Professor of Practice of Global Leadership and Public Policy until 2009. She was a senior adviser to Senator Barack Obama until March 2008, when she resigned from his presidential campaign after apologizing for referring to then-Senator Hillary Clinton as "a monster" during an interview, thinking she was off the record.

Power joined the Obama State Department transition team in late November 2008. She served as Special Assistant to the President and Senior Director for Multilateral Affairs and Human Rights on the National Security Council from January 2009 to February 2013. In April 2012, Obama chose her to chair a newly formed Atrocities Prevention Board. As U.N. ambassador, Power's office focused on such issues as United Nations reform, women's rights and LGBT rights, religious freedom and religious minorities, refugees, human trafficking, human rights, and democracy, including in the Middle East and North Africa, Sudan, and Myanmar. She is considered to have been a key figure in the Obama administration in persuading the president to intervene militarily in Libya. In 2016, she was listed as the 41st-most powerful woman in the world by Forbes.

Power is a subject of the 2014 documentary Watchers of the Sky, which explains the contribution of several notable people, including Power, to the cause of genocide prevention. She won a Pulitzer Prize in 2003 for her book A Problem from Hell: America and the Age of Genocide, a study of the U.S. foreign policy response to genocide. She has also been awarded the 2015 Barnard Medal of Distinction and the 2016 Henry A. Kissinger Prize.

In January 2021, Joe Biden nominated Power to head the United States Agency for International Development. Her nomination was confirmed by the US Senate on April 28, 2021 by a vote of 68-26. 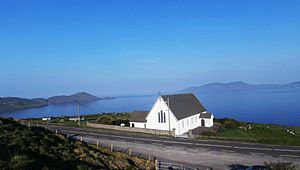 On July 4, 2008, Power married law professor Cass Sunstein, whom she met while working on the Obama campaign. They were married in the Church of Mary Immaculate, Lohar, Waterville, County Kerry, in Ireland. On April 24, 2009, she gave birth to their first child, Declan Power Sunstein. On June 1, 2012, she gave birth to their second child, a daughter, Rían Power Sunstein.

All content from Kiddle encyclopedia articles (including the article images and facts) can be freely used under Attribution-ShareAlike license, unless stated otherwise. Cite this article:
Samantha Power Facts for Kids. Kiddle Encyclopedia.