Bloomeria aurea, with common name golden stars, is a species of Bloomeria that is endemic to California. When blooming in late spring, its bright colors are distinctive.

Bloomeria aurea grow in dry flats and hillsides, and grassy slopes and ridges often in heavy soils and especially in foothill woods, up to 1500 meters in elevation. Golden stars grow in the coastal sage scrub, chaparral, valley grassland and oak woodland plant communities from Baja California in Mexico, to Santa Barbara and Kern Counties in central California.

Individuals of this species have a solid bulb, fibrous-coated, long narrow leaves, and a bracted cluster of many flowers (like exploding fireworks) at the top of tall flower stalk. 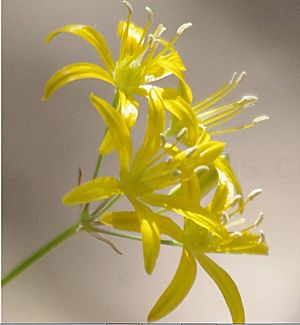 It blooms from April to June. Flowers of "Bloomeria aurea" are about an inch across, with pedicles from one and a half to two inch long. The flowers are orange-yellow and the anthers are bright green. The flowers are yellow and have six equal divisions with six stamens and slender filaments (which if they are looked carefully under a microscope, a short, two-toothed, hairy appendage can be seen at their base). The style is club-shaped, with a three-lobed stigma.

Several angular, wrinkled seeds are in each cell of the roundish capsule. The plant which can grow from six to eighteen inches has long, narrow, grasslike leaf with large flower-cluster which can contain around fifty blossoms.

The only edible part of the plant is its roots. They can be eaten raw, although they do not taste as desirable.

Bloomeria aurea is cultivated as an ornamental plant by specialty native plant nurseries. The plants require a warm position and well-drained rich sandy loam. During the growing season plants need moisture. When dormancy sets in and the foliage dies down, they should be kept dry until the autumn growth appears. These plants can rarely be seen in the colder areas, since the temperatures down between -5 and -10 °C can be tolerated.

Horticultural ranges for Bloomeria aurea are:

All content from Kiddle encyclopedia articles (including the article images and facts) can be freely used under Attribution-ShareAlike license, unless stated otherwise. Cite this article:
Bloomeria aurea Facts for Kids. Kiddle Encyclopedia.