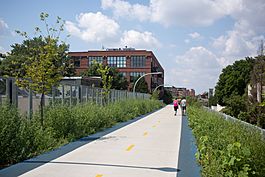 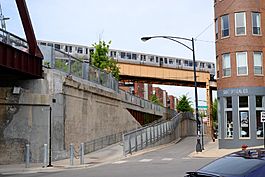 The Bloomingdale Trail is a 2.7-mile (4.3 km) elevated rail trail running east–west on the northwest side of Chicago. In 2015, the City of Chicago converted the former Bloomingdale Line into an elevated greenway, which forms the backbone of the linear park and trail network called The 606. This elevated park passes through the Chicago neighborhoods of Logan Square, Humboldt Park, and West Town. 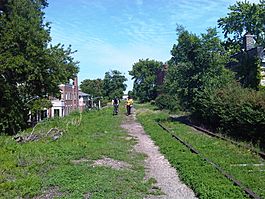 The Bloomingdale in Bucktown in 2009

The Bloomingdale Line was constructed in 1873 by the Chicago and Pacific Railroad Company as part of the 36-mile (58 km) Elgin subdivision from Halsted Street in Chicago to the suburb of Elgin, Illinois. It was soon absorbed by the Chicago, Milwaukee, St. Paul and Pacific Railway (also known as the Milwaukee Road), first via a 999-year lease in 1880 and later with a fee simple deed conveyance to the same in 1900. As a result of mergers and acquisitions, it became part of the Soo Line Railroad, a subsidiary of the Canadian Pacific Railway, which had owned the right-of-way. The City of Chicago purchased the right-of-way from Canadian Pacific Railway in January 2013.

The railroad was elevated approximately twenty feet in the 1910s as result of a city ordinance aimed at reducing pedestrian fatalities at grade crossings. The line had been a street-running railway within Bloomingdale Avenue, an east–west street running at 1800 north; creating the embankment reduced Bloomingdale Avenue's width in some cases, rendering it an alleyway in some portions. Steel-reinforced concrete embankment walls line the right-of-way, and there are 38 viaducts built into the railroad to accommodate cross traffic.

The line was used for both passenger and freight trains and served several local industrial businesses, including a Schwinn Bicycle Company warehouse. The Bloomingdale Line was primarily used to reach the Lakewood Branch and industrial district on Goose Island. The last freight train ran on the line in 2001. 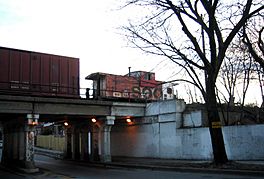 The Bloomingdale Avenue embankment continues west of the Trail's terminus at Ridgeway Avenue. There, it intersects with Metra's commuter tracks of the Milwaukee Road, with northbound North Line trains continuing toward Fox Lake, using Canadian Pacific's C&M Subdivision and West Line trains running along the Bloomingdale tracks west to Elgin via the CP's Elgin Subdivision. The tracks lower to surface-level on the western outskirts of the city.

On average, 3,531 trips are made daily on the 606. Sixty percent of these trips during the week are used for the purposes of transit.

Conversion to a greenway or linear park

Bloomingdale line in 2013 before renovation (left), looking west from Milwaukee Avenue, toward the Blue Line's elevated tracks and (right) in 2015 after renovation. 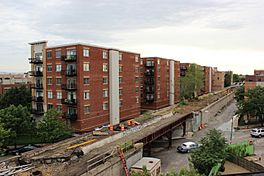 Construction on the trail in August 2014 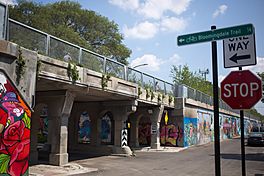 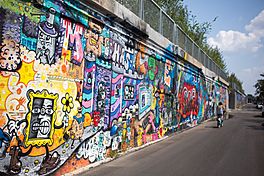 Graffiti along the Bloomingdale Trail in 2015

The City of Chicago first investigated converting the Bloomingdale Line into a greenway in a 1997 bicycle facilities plan, but it remained a freight line with occasional service for several more years. The city and community reintroduced the greenway concept as part of the Logan Square Open Space Plan in 2002-2004. This plan proposed a linear park or greenway with public access ramps every few blocks apart. At the east end, a trailhead would be created at the Chicago River.

A grassroots, non-profit organization, Friends of the Bloomingdale Trail (FBT), was formed in 2003 to be the focal point for advocacy and community involvement in the conversion project. FBT has partnered with the City and The Trust for Public Land, a national non-profit land conservation group, in a collaboration that will lead the project management, design, and development of the park. Although the train tracks used to separate the communities it intersected, the new greenway acts to connect neighborhoods, restaurants, and schools with bikeshare and transit stations.

At 2.7 mi (4.3 km), Bloomingdale Trail is the longest greenway project of a former elevated rail line in the United States and the second longest in the world.

Additionally, many obsolete surface railway rights-of-way throughout the world have become rail trails, including the Illinois Prairie Path which leads west from the Chicago Transit Authority's Blue Line.

The Chicago Department of Transportation announced on July 15, 2009, that it had selected a design firm to lead a team for the initial design and engineering work. After the announcement, the City created and has updated a document that describes the background, the location, and the future of the project.

Collins Engineers, Inc., a Chicago civil and structural engineering firm, was selected by the Chicago Park District to provide Phase II design for the Bloomingdale Park and Multi-Purpose Bicycle Trail project, otherwise referred to as "The Bloomingdale". The multi-disciplinary team led by Collins also includes sub-consultants Michael Van Valkenburgh Associates (MVVA) and Frances Whitehead. MVVA worked on the Phase I design for this project and served as the landscape and urban design architect. Frances Whitehead served as the lead artist for this project. Groundbreaking on the project was scheduled for late summer 2013, and occurred on August 27, 2013 at what would become the Milwaukee Avenue / Levitt Avenue connection to the trail. The trail's final design consisted of a 10 ft (3.0 m) paved path with a 2 ft (0.61 m) soft shoulder on either side.

The Bloomingdale Trail is the backbone of a parks and trail network called "The 606". The system's numeric name is an homage to the city's ZIP Codes, the prefix for nearly all of which is 606. The intent is to symbolize the system tying together myriad diverse neighborhoods across the city.

The trail runs from Ashland Avenue all of the way west to North Ridgeway Avenue. The trail follows along West Bloomingdale Avenue, hence the name "Bloomingdale Trail". There several entrances and exits all along the trail making it very accessible for local pedestrians to use the path for walking, biking, running, etc.

In November 2013, The Alphawood Foundation offered a $2 million grant to finance the Bloomingdale Trail.

There have been various proposals to connect the Bloomingdale Trail to the former site of A. Finkl & Sons Steel, a 22-acre site in Lincoln Park.

All content from Kiddle encyclopedia articles (including the article images and facts) can be freely used under Attribution-ShareAlike license, unless stated otherwise. Cite this article:
Bloomingdale Trail Facts for Kids. Kiddle Encyclopedia.