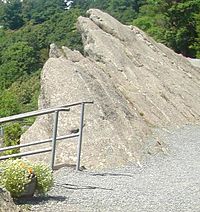 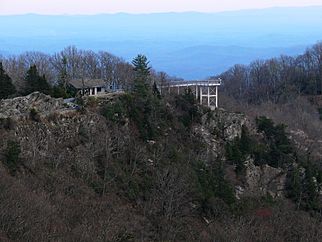 The observation deck at Blowing Rock.

Blowing Rock is a rocky outcropping at the town of Blowing Rock, North Carolina, above a gorge in Caldwell County, in the northwest of that state.

The prevailing wind blows through the gorge toward Blowing Rock. There, at the end of the gorge, the wind's path of least resistance is up the steep slopes surmounted by the outcropping, resulting in a nearly vertical and typically strong wind.

The legend of the Blowing Rock is that a Cherokee brave leapt from the rock into the wilderness below, only to have a gust of wind return him to his lover on top of the rock. This is a typical example of a lover's leap legend.

Blowing Rock is private property; a fee for access is payable at the adjacent souvenir shop.

All content from Kiddle encyclopedia articles (including the article images and facts) can be freely used under Attribution-ShareAlike license, unless stated otherwise. Cite this article:
Blowing Rock (land feature) Facts for Kids. Kiddle Encyclopedia.