The blue-lipped sea krait, blue-banded sea krait, or common sea krait (Laticauda laticaudata) is a species of venomous sea snake in the subfamily Laticaudinae, family Elapidae. It is found in the Indian and Western Pacific Oceans. 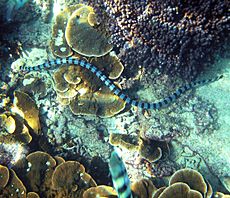 Ventral scales of this snake are large, one-third to more than one-half the width of the body; the nostrils are lateral; nasal scales are separated by internasals; 19 longitudinal rows of imbricate scales are found at midbody; no azygous prefrontal shield is present; rostral scales are undivided; ventrals number 225–243; subcaudals number 38–47 in males, females have 30–35 (ventral and subcaudal counts after Smith 1943:443). The upper lip is dark brown. Total length varies with sex: males are 910 mm (36 in), females are 1,070 mm (42 in); tail lengths are similar: 110 mm (4.3 in). The 19 rows of scales and the dark brown upper lip can be used to differentiate the blue-lipped sea krait from other Laticauda species.

This snake is known to warm up in wedge-tailed shearwater burrows.

All content from Kiddle encyclopedia articles (including the article images and facts) can be freely used under Attribution-ShareAlike license, unless stated otherwise. Cite this article:
Blue-lipped sea krait Facts for Kids. Kiddle Encyclopedia.