Blue Ridge is a community in Houston, Texas, United States that used to be a distinct unincorporated area in northeast Fort Bend County. The community, which was also known as Hobby, is located on a ridge of Oyster Creek, 16 miles (26 km) east of Richmond. The section of Blue Ridge within the Houston City Limits is known as the Fort Bend-Houston Super Neighborhood #41.

The area now known as Blue Ridge was a part of Stephen F. Austin's first colony. The site itself began to be permanently occupied in the late 19th century. As an independent community Blue Ridge did not have any post offices. The W. Allen Robinson family arrived in Blue Ridge in 1894, and in the 1890s the family established a ranch headquarters. Oil was discovered near Blue Ridge in 1919, and a salt mine opened shortly afterwards. In 1925 gas was discovered in the area. As resources were discovered, banks and gambling houses opened and the Handbook of Texas stated that Blue Ridge became a "boomtown". In 1936 the 4,348-acre (1,760 ha) Blue Ridge State Prison Farm incorporated the area, and most Blue Ridge residents were staff members at the facility. Blue Ridge acted as a satellite work camp for the Central Prison Farm.

In 1958 the Texas Department of Corrections voted to sell the prison lands to private developers. The houses were developed in the 1960s and 1970s. Parts of the area were annexed by Houston in the early 1970s. The first population figure for the community was of the year 1970, when the community had 50 residents and no businesses.

The Houston Fort Bend Super Neighborhood has its boundaries as Beltway 8, Fondren Road, Hiram Clarke Road, and McHard Road. Its area is almost 8 square miles (21 km2). Many churches of various ethnic groups and religions are supported by the Blue Ridge community. Carol E. Vaughn of the Houston Chronicle said that the 5-acre (2.0 ha) area, before the formation of the super neighborhood, "has considered itself a stepchild of sorts in the past, an area unwittingly passed back and forth between parents." Half of the community has a Missouri City zip code (77489) west of Chimney Rock - a majority of residents still refer to this section as Missouri City even though it is not located inside the Missouri City city limits. Residents who still use the Missouri City designation are known as Missouri City by Choice residents.

In 1990 members of the Ridgegate and Briargate subdivisions protested proposed bus services from METRO. 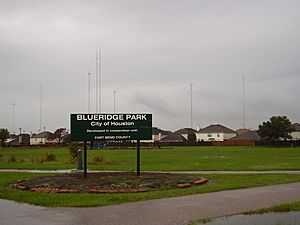 The Blueridge Park, operated by the City of Houston's Parks and Recreation Department, is in Blue Ridge. Fort Bend County operates the Post Oak Park. The 23-acre (93,000 m2) park includes three baseball fields, one concession stand, one softball field, and one toilet facility.

All content from Kiddle encyclopedia articles (including the article images and facts) can be freely used under Attribution-ShareAlike license, unless stated otherwise. Cite this article:
Blue Ridge, Houston Facts for Kids. Kiddle Encyclopedia.