Richmond is a city in and the county seat of Fort Bend County, Texas, United States. The city is located within the Houston–The Woodlands–Sugar Land metropolitan area. As of the 2019 U.S. census, the city population was 12,578.

In 1822, a group of Austin's colonists went up the Brazos River, stopping near present-day Richmond where they built a fort called "Fort Bend". Named after Richmond, England, the town was among the 19 cities first incorporated by the short-lived Republic of Texas, in 1837. Early residents of the city include many prominent figures in Texas lore such as Jane Long, Deaf Smith, and Mirabeau Lamar, who are all buried in Richmond. On August 16, 1889, the town was the site of the "Battle of Richmond", an armed fight culminating the Jaybird–Woodpecker War, a violent feud over post-Reconstruction political control of Fort Bend County. The mayor from 1949 until his death in 2012 was Hilmar Moore.

Historically Richmond had government agencies and nonprofit organizations, while most of the area private businesses were located in Rosenberg.

In 2003 Jeannie Kever of the Houston Chronicle said, "Some of the old buildings have been reincarnated as shops or law offices. But in other ways, life in Richmond isn't so different from that in the big city, with its Wal-Mart and fast-food joints, check-cashing businesses and strip-center sprawl." As of 2006[update] several strip malls are along U.S. Route 59 south of town. During the same year the community included tack stores, two-lane blacktop roads, and horse ranches. John P. Lopez of the Houston Chronicle said, "Richmond is a city of contradiction and transition. It's as if the place is not sure if it wants to be a part of Houston's bustle or remain a slow-paced farm and ranch town. It tries to be both," and, "It is part Acres Homes, part Fort Bend County Fair."

John P. Lopez of the Houston Chronicle said in 2006, "There are a lot of simple scenes. And there are places where reality has polluted neighborhoods."

The wealthiest neighborhood, as of 2003, in Richmond is Hillcrest. Winston Terrace, another neighborhood, had its first houses built in 1940. Construction increased around the end of World War II. Most of the houses were built between 1940 and 1965. Jeannie Kever of the Houston Chronicle said that Winston Terrace is "a swath of mid-20th-century America, with sweeping oak trees and colorful brick or wood bungalows, named for the descendants of one of the region's most illustrious pioneers."

The Texas Department of Criminal Justice operates the Jester State Prison Farm units, including the Jester I Unit, the Carol Vance Unit (formerly the Jester II Unit), the Jester III Unit, and the Jester IV Unit, in an unincorporated area 4 miles (6.4 km) east of Richmond. 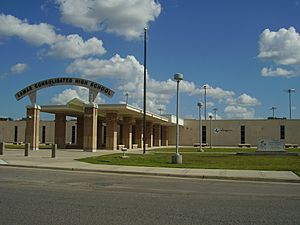 Elementary schools within the Richmond city limits include Jane Long, Pink, and Smith.

All content from Kiddle encyclopedia articles (including the article images and facts) can be freely used under Attribution-ShareAlike license, unless stated otherwise. Cite this article:
Richmond, Texas Facts for Kids. Kiddle Encyclopedia.