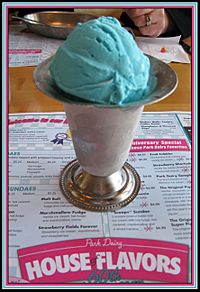 Blue moon is an ice cream flavor with bright blue coloring, available in the Upper Midwest of the United States and originating in Milwaukee, Wisconsin. The Chicago Tribune has described the ice cream as "Smurf-blue, marshmallow-sweet". Blue moon ice cream is one of the flavors that make up Superman ice cream in certain states.

Blue moon is found mainly in the Midwest, Wisconsin in particular. It is found less frequently in other U.S. states. Kilwins also provides this flavor in various states.

A similar flavor has been sold in both Italy and Malta under the name "puffo", which is Italian for "Smurf", as well as in Germany under the names "Schlumpf" and "Engelblau", which translate to "Smurf" and "angel blue", respectively.

In France, it is called "schtroumpf" ("Smurf"), in Slovenia under the name "modro nebo" ("blue sky"), and in Argentina as "crema del cielo" ("sky cream").

In Poland, this variety of ice cream is called "smerfowe" ("Smurf-like") and is usually bubble-gum flavored.

The varieties of blue moon vary in both color and flavor. Many aficionados of each variety of blue moon claim that their variety is the "real one", the "original", etc.

Some dairies that make Blue Moon keep their ingredients a secret, adding to the mystique. Varieties that have distinct berry or vanilla flavor notes are sometimes theorized to have been originally flavored with castoreum.

All content from Kiddle encyclopedia articles (including the article images and facts) can be freely used under Attribution-ShareAlike license, unless stated otherwise. Cite this article:
Blue moon (ice cream) Facts for Kids. Kiddle Encyclopedia.