The Bluevale and Whitevale Towers was the name for a development of twin tower block flats situated in the Camlachie district within the East End of Glasgow, Scotland. Officially known as 109 Bluevale Street and 51 Whitevale Street (often nicknamed the Gallowgate Twins or the Camlachie Twin Towers), the two towers were the tallest buildings in Scotland although with only 29 occupiable floors (the 30th floor was a mechanical floor for building services and a drying area), they were not the buildings with the highest occupied floor level in the city (or Scotland); that distinction belonged to the contemporary Red Road estate on the north side of the city. They were briefly Scotland's second tallest freestanding structure following the demolition of Inverkip Power Station on the Firth of Clyde in 2013.

After originally being condemned in 2011, in early 2016 the demolition of both towers was completed, meaning that the Glasgow Tower is now the tallest freestanding structure in both Glasgow and Scotland as a whole. 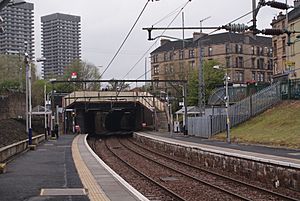 The towers were prominent in the Glasgow city skyline, as seen here from Duke Street railway station

Faced with crippling housing shortages in the immediate post-war period, the city undertook the building of multi-storey housing in tower blocks in the 1960s and early 1970s on a grand scale, which led to Glasgow becoming the first truly high-rise city in Britain.

It would not be until 1988 that high rises were built in the city once again, with the construction of the 17-storey Forum Hotel next to the SECC. The 20-storey Hilton Hotel in Anderston followed in 1992. From the early 1990s, Glasgow City Council and its successor, the Glasgow Housing Association, have run a programme of demolishing the worst of the residential tower blocks, including Basil Spence's Gorbals blocks in 1993.

The buildings were also unique in their construction - featuring hydraulic jacks in their foundations to combat sway due to their height. 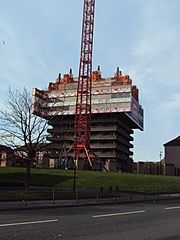 The Bluevale tower during its deconstruction using the top-down method.

In November 2011, it was announced by Glasgow Housing Association of the intention to demolish the development, citing the unpopularity of the estate among residents and high maintenance and running costs.

Demolition of the towers was originally scheduled to take place prior to the 2014 Commonwealth Games, but the complexity of the task pushed the date back to early 2015. Owing to the buildings' design, and their close proximity to the busy North Clyde Line railway which runs immediately next to the site, a conventional "blowdown" with explosives was deemed impractical. The buildings instead would be literally disassembled floor by floor using the "top down" method. The deconstruction process began on in January 2015, starting with the Bluevale tower. The neighbouring Whitevale tower was deconstructed in a similar fashion in 2016.

All content from Kiddle encyclopedia articles (including the article images and facts) can be freely used under Attribution-ShareAlike license, unless stated otherwise. Cite this article:
Bluevale and Whitevale Towers Facts for Kids. Kiddle Encyclopedia.