There was formerly a Navajo community at this location, and the area was called Agua Azul. The town was founded in 1880 as a stop on the A&P Railroad. Several Mormon settlers built an earthen dam and established a community nearby in 1896 named Mormontown. The railroad town faded, and Mormontown adopted the name Bluewater. 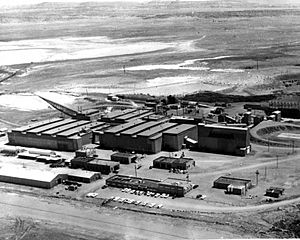 Nearby was the former Bluewater Mill, a uranium mill operated by Anaconda Copper from 1954 to 1982. The site was reclaimed in 1995, under the provisions of the Uranium Mill Tailings Radiation Control Act, and is monitored by the U.S. Department of Energy.

All content from Kiddle encyclopedia articles (including the article images and facts) can be freely used under Attribution-ShareAlike license, unless stated otherwise. Cite this article:
Bluewater Village, New Mexico Facts for Kids. Kiddle Encyclopedia.