Božena Němcová (4 February 1820 in Vienna – 21 January 1862 in Prague) was a Czech writer of the final phase of the Czech National Revival movement.

Her image is featured on the 500 CZK denomination of the banknotes of the Czech koruna.

According to the dating up to now accepted by the majority of Czech authors, Božena Němcová was born in 1820 as Barbara Pankel (or Barbora Panklová according to the usual Czech name-giving for women) in Vienna as a daughter of Johann Pankel from Lower Austria and Teresie Novotná, a maid of Bohemian origin. In her childhood she lived near the small town of Ratibořice, where her grandmother Magdalena Novotná played an important part in her life. Němcová would later write her most famous novel with the main character inspired by her grandmother.

When she was 17 years old, she married Josef Němec, fifteen years her senior, who worked as a customs officer and was therefore a state employee. The marriage was arranged by Barbora's parents and became an unhappy one, as the married couple did not understand each other very well. Němec was said to be a rude and authoritarian man. He was a Bohemian patriot, which did not sit well with his superiors, and he was often transferred to different locations and later lost his job. The couple had four children and suffered from a lack of money. Němcová died in poverty, estranged from her husband. She is said to have been in an intimate relationship with the poet Václav Bolemír Nebeský. The Bohemian patriots arranged a magnificent funeral for her.

Some authors question the birthdate (the preserved documents differ) and the real origin of Božena Němcová. According to one hypothesis, Němcová could have been born three to four years earlier than previously thought, and been an illegitimate daughter of Wilhelmine, Duchess of Sagan (1781–1839). Helena Sobková, a writer of popular-history books about Němcová, believes that Němcová may actually have been the niece of Wilhelmine. In 1816 an illegitimate daughter was born to Wilhelmine's younger sister, Dorothée de Talleyrand-Périgord, and Count Karel Jan Clam-Martinic (1792–1840) in Bourbon-l'Archambault (a French spa). The child was not officially recognized by its mother; it was registered as Marie-Henriette Dessalles. The child's further fate is unknown, and it is possible that Duchess Wilhelmine of Sagan later gave the girl to Němcová's parents to raise her as their own child under the name Barbora Panklová.

None of these speculations, however, have been definitely proven by serious historical research. 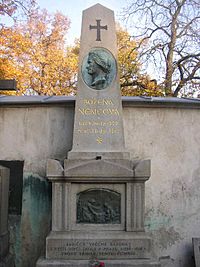 All content from Kiddle encyclopedia articles (including the article images and facts) can be freely used under Attribution-ShareAlike license, unless stated otherwise. Cite this article:
Božena Němcová Facts for Kids. Kiddle Encyclopedia.