Boag's Brewery (J. Boag & Son) is an Australian brewery company founded in 1883 by James Boag and his son, also named James, in Launceston, Tasmania, Australia. It is now owned by Lion, a Trans-Tasman subsidiary company of Japanese beverage conglomerate, Kirin. All of the company's beers are produced in Launceston. 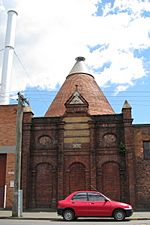 James Boag I arrived in Australia with his wife, Janet, and their four children in 1853 from Scotland. After three months in the Victorian goldfields, they came to Tasmania. After he and his son James Boag II left the Cornwall Brewery in 1878, James II went into partnership with John Glenwright at the Cataract Brewery an James I became the licensee of the All Year Round Hotel.

In 1881, the Esk Brewery was established on the banks of the North Esk River in Launceston by Charles Stammers Button. John Fawns died, and James Boag III was born. In 1883, James I and his son took over the Esk Brewery. J. Boag & Son was officially formed in 1883, as the partnership between James Boag I and his son, to operate the brewery. The company's initial output was seven hogsheads of beer weekly. The name 'Esk Brewery' was retained, although 'Boag's Brewery' became a frequent reference.

In 1887, James Boag II began management of the company on the retirement of his father. A new malthouse was built and weekly production had increased to more than 500 hogsheads, with the brewery employing a 30 members of staff.

In 1898, J. Boag & Son purchased the Cornwall Brewery and amalgamated it with the Esk Brewery; James Boag I died in 1890.

James Boag II died in 1919 and was succeeded by James Boag III who had been training at Tooth and Co.'s brewery in Sydney.

In 1924, James Boag III retired temporarily from the company, and returned in 1930 as Managing Director, a position he held until his death in 1944. His obituary in the Examiner reported: "Having been closely connected with business and sporting activities, Mr Boag was known and respected by a wide circle of friends. At the time of his death, he was Managing Director of J. Boag & Son Limited and a Director of Tasmanian Breweries Pty Limited."

George Boag, James III's second son, took over James' seat on the Board; he was the last Boag working in the business, retiring in 1976 after the death of his wife. 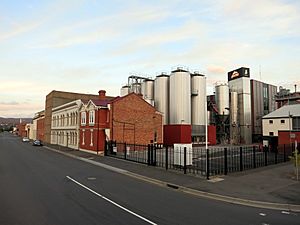 In 2000, San Miguel Corporation acquired J. Boag & Son (previously a publicly listed company) for $92 million. The existing Tasmanian management was retained to continue running the company; production had increased annually for the previous 3 years and this growth was planned to continue.

In 2004, Boag's Brewery was expanded to occupy the complete block enclosed by William, Tamar and Shield Streets and The Esplanade. 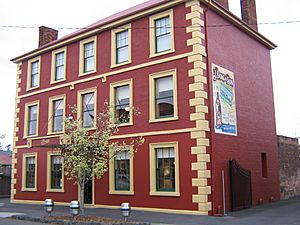 All content from Kiddle encyclopedia articles (including the article images and facts) can be freely used under Attribution-ShareAlike license, unless stated otherwise. Cite this article:
Boag's Brewery Facts for Kids. Kiddle Encyclopedia.