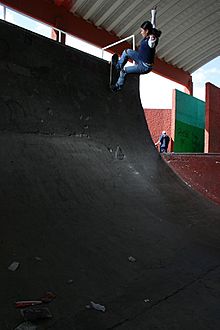 Boardsports are sports that are played with some sort of board as the primary equipment. These sports take place on a variety of terrain, from paved flat-ground and snow-covered hills to water and air. Most boardsports are considered action sports or extreme sports, and thus often appeal to youth. A large proportion of youth partaking in these sports, together with aesthetic damage to property from sports like skateboarding, has led to many board sports being marginalized by the greater world of sports in the past. However, many board sports are ever-more frequently gaining mainstream recognition, and with this recognition have enjoyed wider broadcast, sponsorship and inclusion in institutional sporting events, including the Olympic Games.

Surfing was the first boardsport, originating from Polynesian culture. Skateboarding was then invented by surfers looking to "surf" on land. Most boardsports have similar, equally unknown origins.

Using data collected in the past decade, it is estimated there are 18-50 million skateboarders, 5-25 million surfers, participate in boardsports worldwide.

There are a variety of board sports, which are characterized by terrain: Surf, Snow, Wake, Skate are the primary.

Surfing
The grandfather of all board sports, is a surface water sport that involves the participant being carried by a breaking wave.
Stand Up Paddle Surfing (SUP)
A variant of surfing where one always a stands up on the board and propels oneself by a one-bladed paddle, without lying down on the board. Although originally the goal was to catch and surf the waves, a racing modality has emerged with similarities to kayaking.
Skimboarding (1930s)
A discipline of surfing involving riding a board on wet sand or shallow water. A predominantly recreational activity that has evolved into a highly competitive water sport.
Windsurfing (1970)
Also known as sailboarding. A water sport involving travel over water on a small 2-4.7 metre board powered by wind acting on a single sail. The sail is connected to the board by a flexible joint
Bodyboarding (1971)
Wave riding consisting of a small, roughly rectangular piece of foam, shaped to a hydrodynamic form. The bodyboard is ridden predominantly lying down, (or 'prone'). It can also be ridden in a half-standing stance (known as 'dropknee') or can even be ridden standing up.
Kneeboarding (1973)
A discipline of surfing where the rider paddles on his belly into a wave on a kneeboard, then rides the wave face typically on both knees.
Riverboarding (1978)
A boardsport in which the participant is prone on the board with fins on his/her feet for propulsion and steering.
Wakeboarding (1983)
A surface watersport created from a combination of water skiing, snow boarding and surfing techniques. As in water skiing, the rider is towed behind a boat, or a cable skiing setup.
Skurfing (1984)
Another fast growing boardsport is skurfing a mix of surfing and more conventional water sports in which the participant is towed behind the boat.
Flowriding (1991)
Similar to surfing but done on a man-made artificial sheet wave.
Wakeskating (1990s)
A rider is pulled behind a boat on a wakeskate which is smaller than a wakeboard and has no bindings with a foam or griptape surface.
Kitesurfing (1996)
Also known as kiteboarding. Boards similar to those known from windsurfing or wakeboarding are propelled by an inflatable or foil power kite, allowing for high speeds and high jumps. Other variations are to use a wheeled board or buggy on land, or skis or a snowboard on snow.

Skateboarding (1950)
Uses a board mounted on wheels, and often ridden on a half-pipe, in urban settings, or emptied specially built swimming pools.
Longboarding (1970s)
Similar to freeboarding but with long skateboards that come in different shapes and sizes, longboarding is mostly a racing sport but there are many other styles as well.
Snakeboard (1989)
Similar to skateboarding, but also influenced heavily by snowboarding.
Freestyle scootering (1996)
an action sport which involves using scooters to perform freestyle tricks, in a manner similar to skateboarding and BMX freestyle.
Freeboarding
Often said to be the board whose feel is the most similar to snowboarding. There are two extra castor wheels in the middle of the base that are somewhat lower than the other four. This allows the rider to distribute his weight to only one "edge", as in snowboarding. This gives the rider the ability to slide, an ability no other land board has besides the longboard.
Caster board
Two narrow platforms known as "decks" are adjoined by a rubber or aluminium coated metal beam that houses a strong spring.
T-boarding
A skateboard deck with two wheels that can spin 360 degrees.

Land windsurfing
A sport similar to traditional windsurfing that is performed on land rather than water. A four-wheeled deck, similar to a mountain board or skateboard deck, is commonly used in conjunction with a mast and sail in order to project the board across land.
Mountainboarding (1992)
Similar to snowboarding, but on snowless peaks (in between winter seasons). The board is wider and sturdier. Mountainboarding is similar to skateboarding in the way that mountainbiking is similar to regular biking.
Kite landboarding
Similar to Kite Surfing but the kite is used to pull the rider along flat ground (often a hard packed sandy beach) on a mountainboard

Snowboarding (1977)
A cross between skateboarding and skiing, the board medium is snow, although the condition of the snow can have a major impact on snowboarding style and technique. The four subcategories are freeride, freestyle, alpine and powder.
Snowskating (1998)
This is similar to snowboarding but there are no bindings used. Instead the snow skate has a foam grip similar to griptape, enabling you to do skateboard style tricks. There are four main types of snowskates: Single deck (a skateboard-deck-like platform made out of either wood and/or plastic)
Snowkiting
This is when a kite is used to pull a snowboarder along.

Sandboarding
A recreational activity similar to snowboarding that takes place on sand dunes rather than snow-covered hills.

Skysurfing
A kind of skydiving in which the skydiver wears a board attached to their feet and performs surfing-style aerobatics during freefall.

All content from Kiddle encyclopedia articles (including the article images and facts) can be freely used under Attribution-ShareAlike license, unless stated otherwise. Cite this article:
Boardsport Facts for Kids. Kiddle Encyclopedia.