On boats and ships, the keel extends below a boat along the central line. When a boat or ship is being built then the keel laying down is the first step and the date is noted as the start of the job. Only the launching of the ship more important.

Evidence of early wooden ship keels has been found in various sites around the world. In Europe, Viking longships have been found which were buried but still show their keel and the way the boat was built.

The adjustable centerboard keel traces its roots to the medieval Chinese Song dynasty. Many Song Chinese junk ships had a ballasted and bilge keel that consisted of wooden beams bound together with iron hoops. Maritime technology and the technological know-how allowed Song dynasty ships to be used in naval warfare between the Southern Song Dynasty, the Jin dynasty (1115–1234), and the Mongols. 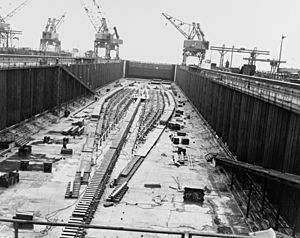 Keel laid for the USS United States in drydock

The most common type of keel is the "flat plate keel", and this is fitted to ocean-going ships and other vessels. A form of keel found on smaller vessels is the "bar keel", which may be fitted in trawlers, tugs, and smaller ferries.

In non-sailing boats, the keel helps the hull to move forward, rather than slipping to the side. In traditional boat building, this is provided by the keel, which comes out from the bottom of the hull. There are many types of keels, including full keels, long keels, fin keels, winged keels, bulb keels, and twin keels among other designs.

The keel works by changing the sideways movement of the wind into a forward movement. It also gives weight to the boat. 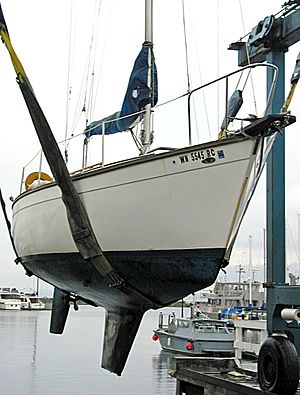 Keels are different from centreboards and made of heavy materials to give weight to steady the boat. Keels may be fixed or they may lift up to allow sailing when the water is not deep. The amount of sail use is smaller when sailing with the keel up in the boat.

Other types of keels are swing keels and canting keels. Canting keels can move sideways and can be on racing yachts, such as those in the Volvo Ocean Race.

All content from Kiddle encyclopedia articles (including the article images and facts) can be freely used under Attribution-ShareAlike license, unless stated otherwise. Cite this article:
Boat keel Facts for Kids. Kiddle Encyclopedia.