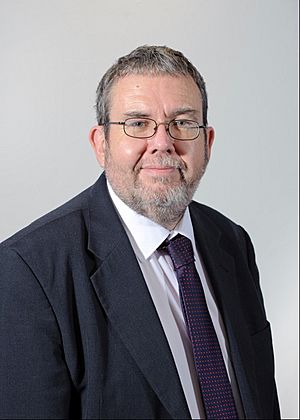 Robert "Bob" Jones CBE (c. 1955 – 1 July 2014) was a British police officer and politician. He was the West Midlands Police and Crime Commissioner for Labour West Midlands Police and Crime Commissioner from 15 November 2012 until his death. He served as a Labour Councillor for Blakenhall Ward on Wolverhampton City Council from 1 May 1980 until 2013.

Jones was born in Wolverhampton. He studied at the University of Nottingham. He got a CBE in 2010.

All content from Kiddle encyclopedia articles (including the article images and facts) can be freely used under Attribution-ShareAlike license, unless stated otherwise. Cite this article:
Bob Jones (police commissioner) Facts for Kids. Kiddle Encyclopedia.