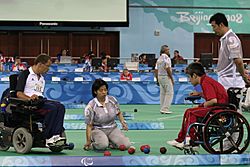 Boccia is a ball sport played by disabled people including people with cerebral palsy, muscular dystrophy or spinal cord injury. Players use leather or soft [plastic] covered balls. It was first played at the Paralympic Games in 1984. The sport is for both men and women, who play against each other in competition. It was originally developed to be a sport that could be played by wheelchair users with severe cerebral palsy, was then extended to include other players with severe impairment affecting their movement, and later to the wider community including people with learning disability, milder movement disabilities, or visual impairment.

In the Paralympics there are four categories of players based on their level of disability: BC1, BC2, BC3 and BC4. Players take part in competition one at a time, in twos or in teams of three.

All content from Kiddle encyclopedia articles (including the article images and facts) can be freely used under Attribution-ShareAlike license, unless stated otherwise. Cite this article:
Boccia Facts for Kids. Kiddle Encyclopedia.