Kids Encyclopedia Facts
This page is about the animal. For the infestation caused by body lice, see Pediculosis corporis.

The body louse (Pediculus humanus humanus, also known as Pediculus humanus corporis) is a hematophagic ectoparasite louse that infests humans. It is one of three lice which infest humans, the other two being the head louse, and the crab louse or pubic louse.

Despite the name, body lice do not directly live on the host. They lay their eggs on fibres of clothing and only come into contact with the host whenever they need to feed. Since body lice cannot jump or fly, they spread by direct contact with another person or more rarely by contact with clothing or bed sheets that are infested.

Body lice are disease vectors and can transmit pathogens that cause human diseases such as epidemic typhus, trench fever, and relapsing fever. In developed countries, infestations are only a problem in areas of poverty where there is poor body hygiene, crowded living conditions, and a lack of access to clean clothing. Outbreaks can also occur in situations where large groups of people are forced to live in unsanitary conditions. These types of outbreaks are seen globally in prisons, homeless populations, refugees of war, or when natural disasters occur and proper sanitation is not available.

Pediculus humanus humanus (the body louse) is indistinguishable in appearance from Pediculus humanus capitis (the head louse), and the two subspecies will interbreed under laboratory conditions. In their natural state, however, they occupy different habitats and do not usually meet. They can feed up to five times a day and as adults can live for about thirty days, but if they are separated from their host they will die within a week. If the conditions are favorable, the body louse can reproduce rapidly. After the final molt, female and male lice will mate immediately. A female louse can lay up to 200–300 eggs during her lifetime.

The life cycle of the body louse consists of three stages: egg, nymph, and adult. 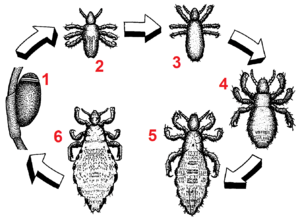 The two P. humanus subspecies are morphologically quite identical. Their heads are short with two antennae that are split into five segments each, compacted thorax, seven segmented abdomen with lateral paratergal plates.

The body louse diverged from the head louse around 100,000 years ago, hinting at the time of the origin of clothing. Body lice were first described by Carl Linnaeus in the 10th edition of Systema Naturae. The human body louse had its genome sequenced in 2010, and at that time it had the smallest known insect genome. The body louse belongs to the phylum Arthropoda, class Insecta, order Phthiraptera and family Pediculidae. There are roughly 5,000 species of lice described, 4,000 are parasitizing birds, while additional 800 are special parasites of mammals worldwide.

Since an infestation can include thousands of lice, with each of them biting five times a day, the bites can cause strong itching, especially at the beginning of the infestation, that can result in skin excoriations and secondary infections. If an individual is exposed to a long-term infestation, he or she may experience apathy, lethargy and fatigue.

In principle, body louse infestations can be controlled by periodically changing clothes and bedding. Thereafter, clothes, towels, and bedding should be washed in hot water (at least 50 °C (122 °F)) and dried using a hot cycle. The itching can be treated with topical and systemic corticosteroids and antihistamines. In case of secondary infections, antibiotics can be used to control the bacterial infection. When changing regularly of cloths and bedding is not possible, the infested items could be treated with insecticides.

Unlike other species of lice, body lice can also act as vectors of disease. The most important pathogens which are transmitted by them are Rickettsia prowazekii (causes epidemic typhus), Borrelia recurrentis (causes relapsing fever), and Bartonella quintana (causes trench fever).

All content from Kiddle encyclopedia articles (including the article images and facts) can be freely used under Attribution-ShareAlike license, unless stated otherwise. Cite this article:
Body louse Facts for Kids. Kiddle Encyclopedia.