Boobyalla was a shipping port on the north-east coast of Tasmania, Australia during the latter half of the nineteenth century. Coastal vessels ran regularly to the port from other Tasmanian ports, carting tin from the mines around nearby Mount Cameron. 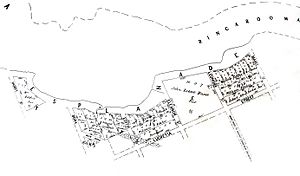 Plan of Boobyalla in the early 1900s

The Boobyalla River, on which the port used to sit, is now a possible habitat for the rare fish species dwarf galaxid and Australian grayling, as well as the Green and Gold Frog Litoria raniformis.

Little remains of Boobyalla, now a ghost town, as buildings such as the old hotel and houses were either burned down by bushfires or dismantled. Remnants of the old wharf are still visible at the edge of the silted-up Boobyalla River. A single property now owns the whole site with the main house located at the end of former Hurst Street.

All content from Kiddle encyclopedia articles (including the article images and facts) can be freely used under Attribution-ShareAlike license, unless stated otherwise. Cite this article:
Boobyalla Facts for Kids. Kiddle Encyclopedia.