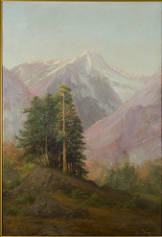 Mount Booker, with an elevation of 8,284 feet (2,525 m), is located in the North Cascades of Washington, about 1.5 miles SE of Mount Buckner, between Park Creek and Stehekin River.

Landscape painter Abby Williams Hill, of Tacoma, Washington, was contracted by the Great Northern Railway Company to paint pictures of the North Cascades, and she first painted Mount Booker in 1903. At the time of Hill's painting, the mountain had not yet been named; newspaper critics called it "No-name mountain."

Abby Hill wrote to the National Geological Survey to determine the mountain's name, and the agency offered her the opportunity to name it. She had previously traveled to visit Booker T. Washington (d. 1915), and she attended his lectures in Tuskegee, Alabama, in the fall of 1901. She was also very moved by her experiences with Jim Crow laws in the South, as well as by Washington's lectures. As a result, Abby Hill named the mountain in honor of Booker T. Washington.

The first ascent of the Northeast face of Mt. Booker was completed by Dan Davis and John Holland on August 22, 1964 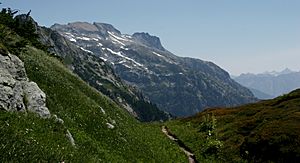 All content from Kiddle encyclopedia articles (including the article images and facts) can be freely used under Attribution-ShareAlike license, unless stated otherwise. Cite this article:
Booker Mountain Facts for Kids. Kiddle Encyclopedia.