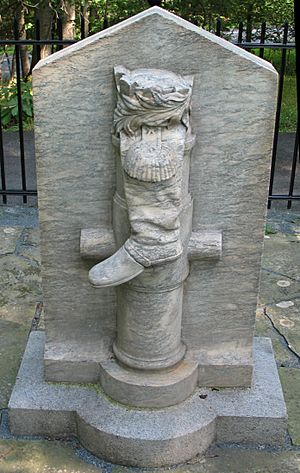 The Boot Monument is an American Revolutionary War memorial located in Saratoga National Historical Park, New York. It commemorates Major General Benedict Arnold's service at the Battles of Saratoga in the Continental Army, but does not name him.

John Watts de Peyster, a former Major General for the New York State Militia during the American Civil War and writer of several military histories about the Battle of Saratoga, erected the monument to commemorate Arnold's contribution to the Continental Army's victory over the British. Arnold was wounded in the foot during the Battle of Quebec, and suffered further injury in the Battle of Ridgefield when his horse was shot out from under him. His last battle injury was at Saratoga, and it occurred near where this monument is located at Tour Stop #7 – Breymann Redoubt. The leg wound effectively ended his career as a fighting soldier. It reads:

Erected 1887 By
JOHN WATTS de PEYSTER
Brev: Maj: Gen: S.N.Y.
2nd V. Pres't Saratoga Mon't Ass't'n:
In memory of
the "most brilliant soldier" of the
Continental Army
who was desperately wounded
on this spot the sally port of
BURGOYNES GREAT WESTERN REDOUBT
7th October, 1777
winning for his countrymen
the decisive battle of the
American Revolution
and for himself the rank of
Major General.

Arnold suffered what he considered a series of slights and insults by the Continental Congress in the months and years following Saratoga, as the Revolutionary War continued. He also opposed treaties that brought French military assistance to the Americans. The wounded Arnold began negotiations with British agents that culminated in his changing sides in September 1780. As part of these negotiations, Arnold attempted unsuccessfully to hand his American command, the key fortification of West Point, over to the British.

This attempt failed because of the capture of Major John André. Following the overall failure of the treasonous operation, Arnold escaped to the British lines. As a reward for turning his coat, Arnold was paid £6,000 and commissioned as a brigadier general in the King's troops. For the rest of the war he headed raiding parties that probed Continental Congress-controlled territories and tried to do damage.

Based on one of these raids, an apocryphal story that has circulated in various versions states:

When Benedict Arnold was leading the forces of the King against his former compatriots in Virginia, among his prisoners was a certain plucky and witty officer, who, in answer to Arnold's question, "What will the Americans do with me if they catch me?" replied, "They will cut off the leg which was wounded when you were fighting so gloriously for the cause of liberty, and bury it with the honors of war, and hang the rest of your body on a gibbet."

Benedict Arnold is not mentioned by name on the Boot Monument; the monument thus serves as a form of damnatio memoriae.

All content from Kiddle encyclopedia articles (including the article images and facts) can be freely used under Attribution-ShareAlike license, unless stated otherwise. Cite this article:
Boot Monument Facts for Kids. Kiddle Encyclopedia.