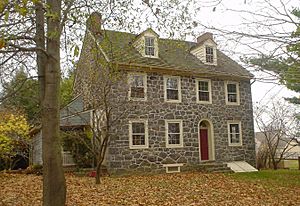 The Booth Farm built in 1819 is listed on the National Register of Historical Places.

Booths Corner is named after Thomas Booth, who became a merchant in the village in 1854 and served as postmaster. The Booth family in Bethel can be traced back to Robert Booth who emigrated to Pennsylvania from Yorkshire, England in 1712.

All content from Kiddle encyclopedia articles (including the article images and facts) can be freely used under Attribution-ShareAlike license, unless stated otherwise. Cite this article:
Booths Corner, Pennsylvania Facts for Kids. Kiddle Encyclopedia.