Bordersville is a predominantly African American community on Farm to Market Road 1960 in northeast Harris County, Texas, United States. The community, located less than one half-mile from George Bush Intercontinental Airport, has about 80% of its territory in the City of Houston and the rest in an unincorporated area.

Bordersville was established in an unincorporated section of Harris County, Texas in 1927 after the closing of a sawmill in the nearby city of Humble. African-Americans formerly employed at the mill were forced to leave. A man named Edgar Borders opened a mill close in proximity to the closed sawmill and employed some of the former Humble sawmill workers. Borders created wooden shacks to house workers.

Borders died in 1963. Most Bordersville citizens did not own their land. No individuals forced the Bordersville residents out of their homes. Throughout the 1960s, A. W. Jones and other residents founded a civic club which became the Bordersville Neighborhood Council. Many citizens became members of the Houston Junior Chambers of Commerce. Some citizens created a water well, and others painted area houses.

The City of Houston annexed about 80% of Bordersville in 1965. During that year, the basic housing and the lack of paved streets, running water, and sewers convinced some Houstonians that Bordersville had the most severe poverty in the city limits. Residents paid city taxes and did not receive city utilities. Jerry Wood, executive assistant in the Planning and Development Department of the City of Houston, said in a 1998 Houston Chronicle article that the city followed easily tracked survey lines when it adopted the annexation plan of 1965 and that it did not intentionally exclude any part of Bordersville. The city of Houston stated that Bordersville was "the worst pocket of poverty in the city."

In 1975, Bordersville had 550 residents. Residents earned annual incomes averaging to between $2,500 and $3,500 United States dollars. Fire trucks of the Houston Fire Department delivered water for bathing, cooking, and drinking on a twice-weekly basis during 1975.

Water service lines opened in 1981. In the 1980s, the Three H Service Center collaborated in an organization of funding to install sink, bathtub, and toilet facilities in Bordersville residences. In 1985, 700 citizens lived in 120 residences in Bordersville. By 1985 cooking and heating fires had ruined many of the original Bordersville homes. Maps in the 1980s revealed four churches in the Bordersville area. During the same year, most residents cooked food on wood stoves and with outdoor appliances. The community lacked public transportation access; this increased unemployment. Social Security was the main source of income for the community, which had a disproportionate population of very young and very elderly residents. In 1985 some residents still used outhouses and some residents did not have bathtubs, sinks, and toilets in their residences.

In 1996 Thomas Phillips, a retired longshoreman and Bordersville resident, joined with representatives of Kingwood and sued the City of Houston in a federal court, arguing that the city could not legally annex areas if it did not provide certain services to some of its existing areas, including Bordersville. In 1998 Phillips advocated for the annexation of Humble Heights, an area around Carver Avenue, Dunbar Avenue, and Granger Street, into Houston; if the residents are annexed they would use the city sewer system instead of septic tanks. As of 2008 the area remains unincorporated.

A Lone Star College–Kingwood presentation about Bordersville states that the community "may possibly disappear as commercial development claims much of the land." 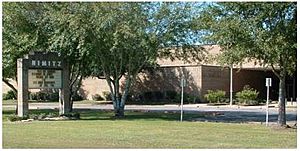 All content from Kiddle encyclopedia articles (including the article images and facts) can be freely used under Attribution-ShareAlike license, unless stated otherwise. Cite this article:
Bordersville, Houston Facts for Kids. Kiddle Encyclopedia.