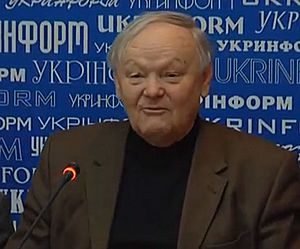 Boris Oleynik (Ukrainian: Олійник Борис Ілліч; 22 October 1935 – 30 April 2017) was a Ukrainian poet, translator, and politician. He served on the Verkhovna Rada from 1992 to 2006. He was also a member of the National Academy of Sciences of Ukraine. He was a communist. He taught cultural and diplomatic studies at the Taras Shevchenko National University of Kyiv.

All content from Kiddle encyclopedia articles (including the article images and facts) can be freely used under Attribution-ShareAlike license, unless stated otherwise. Cite this article:
Boris Oleynik Facts for Kids. Kiddle Encyclopedia.