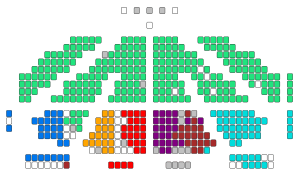 In the Verkhovna Rada elections, the seats are divided among all parties that achieved a minimum 3% nationwide vote tally, using the "Hamilton method of apportionment".

The latest elections in 2007 to the Verkhovna Rada were held on September 30, 2007. On October 8, 2008, President Viktor Yushchenko dissolved the parliament and called early elections, however these never took place.

Next election to the Verkhovna Rada will be held on October 28, 2012.

The name Rada (Ukrainian: Рада) means "council". It originated in medieval Rus', and in the 10th century represented a boyar council. It was also used by Dnieper Cossacks in the 17th and 18th centuries for the meetings where major decisions were made and new councils were elected by popular vote.

This name was later used by the Ukrainian Revolutionary government between March 17, 1917 and April 29, 1918 (Central Rada).

Verkhovna, is the feminine form of the adjective "верховний" meaning supreme. It is derived from the Ukrainian word "верх" meaning "top".

All content from Kiddle encyclopedia articles (including the article images and facts) can be freely used under Attribution-ShareAlike license, unless stated otherwise. Cite this article:
Verkhovna Rada Facts for Kids. Kiddle Encyclopedia.