Boronia stricta is a plant in the citrus family, Rutaceae and is endemic to near-coastal areas of the south-west of Western Australia. It is a slender shrub with often crowded pinnate leaves with linear leaflets, and pink, four-petalled flowers borne singly or in groups of two or three in leaf axils. 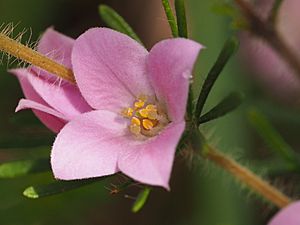 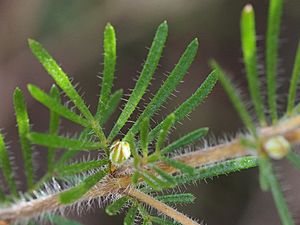 Boronia stricta was first formally described in 1845 by Friedrich Gottlieb Bartling and the description was published in Plantae Preissianae. The specific epithet (stricta) is a Latin word meaning "straight", "erect" or "rigid".

Boronia stricta is classified as "not threatened" by the Western Australian Government Department of Parks and Wildlife.

All content from Kiddle encyclopedia articles (including the article images and facts) can be freely used under Attribution-ShareAlike license, unless stated otherwise. Cite this article:
Boronia stricta Facts for Kids. Kiddle Encyclopedia.