Borre is a small town in Horten municipality, Vestfold og Telemark county. Around 1056 (2013) lives there.

Borre was a center of power during the Viking age, and is mentioned in Snorre Sturlason's "Heimskringla". 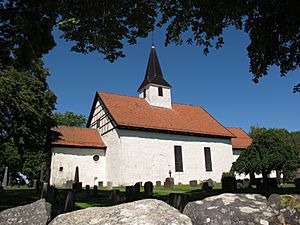 Borre and Horten was originally one town, but was divided in 1857. In 1988 the two towns was joined under the municipality Borre, but was changed to Horten in 2002.

All content from Kiddle encyclopedia articles (including the article images and facts) can be freely used under Attribution-ShareAlike license, unless stated otherwise. Cite this article:
Borre Facts for Kids. Kiddle Encyclopedia.