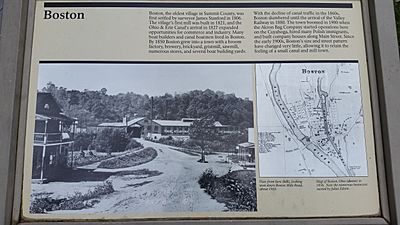 Boston is an unincorporated community in Summit County, in the U.S. state of Ohio. An alternate name is Helltown.

The community takes its name from Boston Township. The first settlement at Boston was made in 1820. A sawmill was built at Boston in about 1821. An early variant name was Boston Mills. A post office called Boston was established in 1825, and remained in operation until 1957.

All content from Kiddle encyclopedia articles (including the article images and facts) can be freely used under Attribution-ShareAlike license, unless stated otherwise. Cite this article:
Boston, Summit County, Ohio Facts for Kids. Kiddle Encyclopedia.