The Boston cream (pie) doughnut or donut is a round, solid, yeast-risen doughnut with chocolate frosting and a custard filling, resulting in a miniature doughnut version of the Boston cream pie.

The doughnut was made out of inspiration from the Boston cream pie which was, in turn, created by chef M. Sanzian at Boston’s Parker House Hotel in 1856. It is a two-layer sponge cake filled with vanilla flavored custard and topped with chocolate glaze and has been a staple to Massachusetts since its creation. The Boston Cream doughnut’s adaptation of the pie is very popular both in Massachusetts, and throughout the United States.

The head of marketing at Canadian doughnut chain Tim Horton's has claimed to be "in love" with the Boston cream doughnut and to pay close attention to the packaging the company produces related to the doughnut.

Although the doughnut's popularity made it natural choice, few (if any) other US states have state doughnuts. Massachusetts state representatives have claimed that the official doughnut legislation enacted in Massachusetts is frivolous and that having a designated doughnut associated with the state can have political pitfalls. 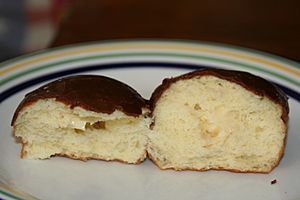 All content from Kiddle encyclopedia articles (including the article images and facts) can be freely used under Attribution-ShareAlike license, unless stated otherwise. Cite this article:
Boston cream doughnut Facts for Kids. Kiddle Encyclopedia.