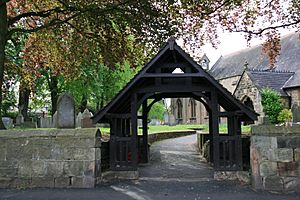 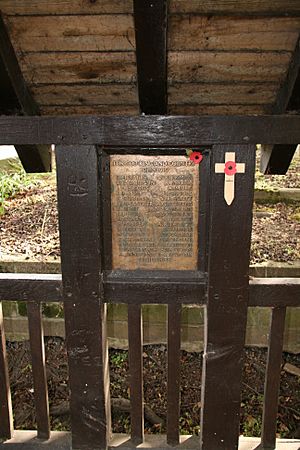 Great War Memorial on the Lych-gate At Boulton St Mary's 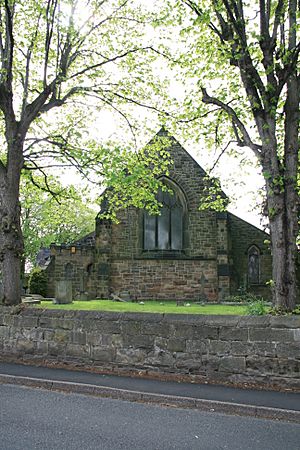 Boulton St Mary's is the Church of England parish church for the Boulton ward of Derby. It is located on Boulton Lane, Alvaston, Derby, Derbyshire, England. It is part of the Diocese of Derby. The church is dedicated to Saint Mary. The church is believed to date back to Norman times and is still in regular ecclesiastical use today.

History Of The Church

The history of Boulton St. Mary's church is believed to date back to around 1150. The founder of the church is Robert Sacheverell of Hopwell (Sawley), a local Lord of the Manor of that time. In 1271, the church becomes the focus of a dispute between the Abbot of Darley and the Sacheverell family who wish to keep the church for the Manor of Boulton. A Court of Enquiry is convened to resolve this matter but it finds against the family and the church is designated as a chapel of St. Peter's Church in Derby. It continues to be a chapelry of St. Peter's church until 1865 when it was made into a parish church in its own right.

Boulton St. Mary's church is mentioned again in the Chantry Roll of 1547, where the founding of the church by Robert Sacheverell was mentioned.

The church is constructed of block sandstone, with a slate roof. In 1841, there was a major extension which increased the size of the west end nave by 12 feet, a vestry was added to the North side along with other alterations. In 1907, there was a further modification to the west end of the church, which included the construction of a twin bell turret.

In 1961, a further major extension to the church was undertaken. The foundation stone of the new extension was laid on 7 January 1961 by Miss Grace Robotham. As part of this extension and alterations a single bell turret was added over the west wall replacing the 1907 twin turret.

The Lych-gate At The Church

The wooden Lych-gate, which now forms the main entrance to the church from Boulton Lane was constructed just after the first World War as a memorial to the local servicemen of Great War. The structure was built by Joseph Thomas Fisher, a local carpenter and joiner who also served in the Great War.

Regular services are on Sunday mornings with Said Communion Service at 8am, Parish Communion at 9:45am and Family Praise at 11:30. For more information about the services and events at the church please visit the church's website.

All content from Kiddle encyclopedia articles (including the article images and facts) can be freely used under Attribution-ShareAlike license, unless stated otherwise. Cite this article:
Boulton St. Mary's Church Facts for Kids. Kiddle Encyclopedia.