The Bournemouth International Centre (commonly known as the BIC) in Bournemouth, Dorset, was opened in September 1984. It is one of the largest venues for conferences, exhibitions, entertainment and events in southern England. Additionally, it is well known for hosting national conferences of major British political parties and trade unions. At opening it comprised two halls, the Windsor Hall and the Tregonwell Hall as well as a leisure swimming pool which has since been closed to provide further conference and exhibition space. 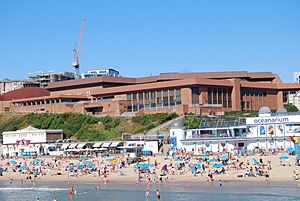 The BIC's location on the seafront

The venue's Windsor Hall has a concert capacity of nearly 4,100 and is one of the bigger indoor music venues in the UK, often included on the arena tours of major artists. This hall has the largest tensile grid in Europe – a tensioned mesh comprising 30 miles of steel wire hung 40 metres above the stage which can suspend approximately 90 tonnes of weight.

In 1990 the circular Purbeck Hall was added at a cost of £6 million.

The Solent Hall can house exhibitions or hold up to 2,000 people for standing music concerts. As part of a refurbishment costing £22 million, this hall controversially replaced the popular swimming pool and wave machine in 2004 after an unsuccessful campaign to save the facility.

Managed by social enterprise BH Live in partnership with Bournemouth Borough Council, the BIC is operated alongside its sister venue, The Pavilion Theatre and Ballroom.

Between 1998 and 2000 the BIC hosted snooker's UK Championship. Since 2006 the BIC has hosted the Premier League Darts on several occasions.

All content from Kiddle encyclopedia articles (including the article images and facts) can be freely used under Attribution-ShareAlike license, unless stated otherwise. Cite this article:
Bournemouth International Centre Facts for Kids. Kiddle Encyclopedia.