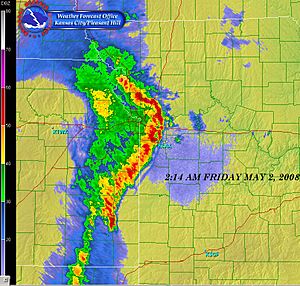 Bow echo is a term for mesoscale convective system which is shaped like an archer's bow when shown on radar. Bow echoes are severe thunderstorms which carry straight line winds and are capable of creating extensive damage around the area affected. The term "bow echo" was first used right around 1978. Such storms often last around two to five hours.

All content from Kiddle encyclopedia articles (including the article images and facts) can be freely used under Attribution-ShareAlike license, unless stated otherwise. Cite this article:
Bow echo Facts for Kids. Kiddle Encyclopedia.