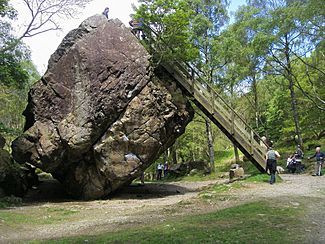 The name may come from the local dialect for 'boulder' although a popular story is its derivation from the Norse god Baldr, a son of Odin. Other versions of the name are ‘The Bowdar Stone’ and ‘Powder or Bounder Stone’. In 1772 William Gilpin wrote that it seemed not to be "..rent from the mountains,.." and was an "..independent creation..", using the name Boother-stone. 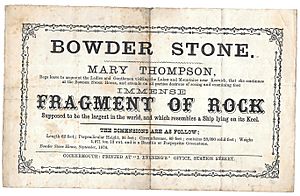 As stated, it is popularly said that the name equates with Balder, the second son of the god Odin. Balder is best known for being slain through the actions of Loki with an arrow or spear made of mistletoe. One side of the Bowder Stone is said to be a simulacrum of the face of Balder and a small hole is said to have once existed on his head where in Norse mythology the weapon pierced and killed him. A carving representing the sun was supposedly located just above the hole. The oldest photographs show a well defined chin and lips whilst a second face is seen by some.

In the 1500s German miners emigrated to Borrowdale to work the copper mines and the legends of 'Balder' may have come with them.

Although the stone was visited and admired by many, such as William Sawrey Gilpin in 1772, Joseph Pocklington was the first to take practical steps to attract visitors, purchasing the site in 1798, fencing it off, clearing away all the smaller rocks and erecting 'Bowderstone Cottage' to house a guide and building a ladder to allow visitors to easily reach the top and admire the outstanding views. In addition to all this activity Joseph designed a hermitage or chapel himself as a Christian counterpoint to the 'druidical' standing stone or menhir that he had also erected. 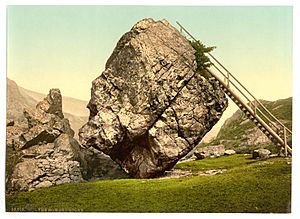 During the works a natural hollow was discovered that ran underneath the boulder and Joseph had a small hole drilled through its base, thereby creating a space that made it possible for visitors to crawl into the hollow to have a ‘hand shake for luck’ with the guide or with another visitor on the other side of the Stone.

At first Joseph Pocklington took his friends by coach to admire the Bowder Stone however later it was opened up to all and large numbers of travellers were escorted around the site by the guide that he employed. In 1817 Joseph died and the Bowder Stone was sold, however it continued to be open to all visitors and the women only tradition was only broken only by John Raven. Mary Carradus was the guide in the 1830s, succeeded in the 1850s by her daughter who married to become Mary Thompson, acting as a guide for 25 years or more.

A gate had been installed at the bottom of the ladder to ensure that visitors paid a small fee to climb to the top. Various records indicate that the guides were assiduous in their duties with comments such as "The old dame makes money out of the stone watching for tourists like a spider." A seat for two and standing room for six existed on the summit of the stone.

The Pepper's were the last family to live at the Bowder Stone, keeping a visitors book that recorded tourists that included "cabinet ministers, undergraduates, professors, publicists, walkers, lawyers", etc. amongst their number. 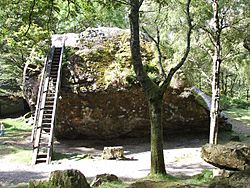 The Bowder Stone steps and summit

The National Trust for Places of Historic Interest or Natural Beauty better known as the 'National Trust' now cares for the Bowder Stone. The access beneath the boulder is now blocked; refreshments are not available; souvenirs can no longer be purchased on site, however Joseph's chapel and the Borrowdale Cottage have been restored as bothies for climbers. The ladder has been retained and evidence from postcards suggest that at least six different ladders have been built over the years.

A car park has been created and a 15-minute walk brings visitors to the Bowder Stone. A bus stop exists near the start of the access path.

Bowder Stone Cottage and the Hermitage

The cottage was for a time used as a tea room and shop, selling souvenirs such as sterioviews, Mauchline Ware with engravings of the Bowder Stone in the form of penknives, boxes, pincushions, glasses cases, etc. Numerous postcards were also issued over the years.

All content from Kiddle encyclopedia articles (including the article images and facts) can be freely used under Attribution-ShareAlike license, unless stated otherwise. Cite this article:
Bowder Stone Facts for Kids. Kiddle Encyclopedia.